Jim Nwobodo: A resourceful Icon at 69 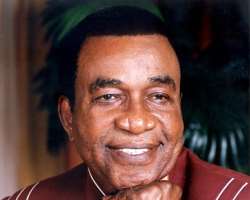 By Emmanuel Ajibulu
Sir, the journey began in May 9 1940, when you joined the lineage of late Susan and Peter Nwobodo, in Agyaragu, Lafia, Northern part of Nigeria, Nassarawa State. You undertook your primary school education at St. James School in Lafia from 1947 - 1950 and completed the secondary school education at Government School, Awka, Eastern Nigeria, now Anambra State, in 1956. In 1956 respectively, you entered St. Peter's College, Zaria, and completed your studies in 1959, obtaining the Teachers Certificate, by which time the college, still bearing the same name, had moved to Kaduna.

Subsequently you enrolled into the Nigerian College of Arts, Science and Technology, first at Enugu and then at Ibadan, to study for the advanced “A” Levels. After which you went into the University College Ibadan in September, 1961, from where you graduated in 1964 with a Bachelor of Arts (Honours) degree in English. As a student and for four years, you represented Nigeria as the only student member (and the only African executive member) of the World University Service (WUS) at the organization's conventions. Also, as an undergraduate you were the National Secretary of Nigerian Students Union. Soon after your University education, you got employed as a tutor in the King's College, Lagos, one of the country's top breeding grounds - known for its reputation for excellence, from 1964 -1966. In 1966, he took up an appointment with the Shell Company of Nigeria as Personnel Development Manager, Lagos. Later that year, he was seconded to Shell BP, Port-Harcourt, still in the capacity of Personnel Development Manager, a post which he held throughout the Nigerian - Biafra war. Other qualifications to your credit are Doctor of Laws, honoris causa (1991) and Executive Programme in management at Harvard Business School, Boston, Massachusetts, U.S.A.

Moreover, you recorded an enviable and meritorious success after founding Link Group International Limited, of which you were the Chairman/Executive Director; it grew with branches in Lagos, Kano, Benin City, Aba, Calabar and Enugu. Link Pharmaceutical which represents Upjohn Worldwide, one of the five major drug manufacturing companies in the world and based in Kalamazoo, Michigan, is a subsidiary of Link Group International Limited. Apart from this you were also Chairman/Executive Director of Jimson International AL Cargo Agencies, with headquarters in Lagos. You are also the Chairman / Publisher of Satellite Press Limited, publishers of Satellite Daily and Sunday Satellite, and ultimately you are Chief Executive Officer of Savannah Bank. I can go on and on.

The people of Anambra will always remain grateful to you in the few years you spent with them as their Governor. Then you successfully secured a package from a coalition of international bankers, who represented a consortium of American Banks, for the development of infrastructure facilities of post–war Anambra State. This laudable initiative of yours catered for The Greater Enugu Water Project, the Ikenga Hotels at A wka and Nsukka, the Flour Mill at Emene, the Abakiliki Water Scheme, the Aluminium Ports Factory at Ogbede in Igbo-Etiti Local Government Area, the Building Materials Factory at Ezillo in Ishielu Local Government Area, the Nike Lake Resort etc.

Furthermore, after the collapse of the second republic which interested the incarceration of many political leaders of the time including Jim and the still born third republic, the Abacha administration came into power with the establishment of the Constitutional Conference commissioned to midwife a constitution that would give the political direction and the future of Nigeria. You (Chief Jim Nwobodo) was appointed a member of that Commission and also served as the Chairman of the publicity committee of the Commission. While still a member of the Constitutional Conference commission, he was appointed a Minister of the Federal Republic of Nigeria in 1995 and was given charge of the Federal Ministry of Youth and Sports. During his tenure Nigeria's Olympic team won two gold medals, the high point being the Gold medal in football by the Nigeria (Dream Team). He was subsequently a member of the Social Democratic Party (SDP), the United Nigeria Congress Party (UNCP) and later Grassroots Democratic Movement (GDM). He is a founding member of the Peoples Democratic Party (PDP). In 1998 he was one of the seven presidential aspirants, including President Obasanjo that sought the PDP'S ticket to Fly its Flag at the general elections 1999.He was later in 1999 elected Senator of the Federal Republic of Nigeria, where he has served till May 2003 in the position of Chairman, Senate Committee on Internal Affairs. He was the Presidential Candidate for the UNPP in the 2003 General elections.

Your outstanding achievements are so enormous that it won't be fair if I fail to commend you of your contribution to the growth of Nigeria and for doing Nigeria proud in your field of endeavours. The month of May is a significant month for all Nigerians, be it workers (May 1), politicians (May 29), and you can also recall that even the late sage and nationalist Chief Obafemi Awolowo (of blessed memory) died also in May 9, 1987 and today (May 9 2009) marks his 22nd year of his demise. These are indications that you are a great man of repute. We still expect more from you; the sky is the base.

Happy Birthday to you!