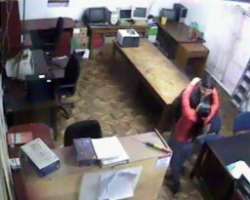 A civil servant has been caught on CCTV in a rather compromising position in the council office where he works.

Footage captured by security cameras in the office appear to show the male member of staff having sex with a woman in a number of different rooms in the building.

Images taken from the CCTV and leaked on Facebook have caused outrage among residents of the city of Oruro in Bolivia where the government office is located.

It was reported that the man in the footage works in the council building and the woman is a former government employee.

.
View gallery
.
The images show the couple in various stages of undress in various rooms of the building.

One angry web user wrote: “I bet 99 per cent of all government workers do the same, with their secretaries or whoever. It's scary how high they get on power.”