By All Progressives Congress USA 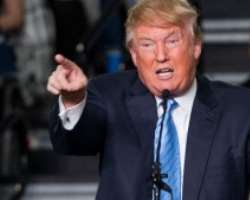 This publication is also intended to commend the only black and Nigerian present at Tramp Donald Trump’s rally in Wichita, Kansas. His presence gave Republican Presidential candidate temperature protesting, Nigerians and Mexicans have taken all the jobs meant for honest, hard-working Americans.

I’ll tell you why. Because they are corrupt. Their Governments are so corrupt, they rob the people blind and bring it all here to spend. And their people run away and come down here and take our jobs! We can’t have that! If I become president, we’ll send them all home. We’ll build a wall at the Atlantic Shore. Then maybe we’ll re-colonize them because obviously they did not learn a damn thing from the British!”, said Tramp Trump.

Seemingly and unfortunately, has no adequate knowledge of immigration laws and there about how folks genuinely enter America through Diversified Visa (DV) Lottery, Work Permit, etc. As such, there are legitimate immigrants lawfully-living in United States including Nigerians busy doing their own thing rightfully. Such Nigerians has the same and equal opportunity in their disposal but never flunked it and respecting the society they live in.

Presumably, you are astonished with accumulated successes of Nigerians in America, couple with the recently appointment made by President Barack Obama’s administration. As you alleged and raised dust that President Obama is not from United States, ragged war against his campaign, now you are taking on harmless Nigerians.

I can confidently say this is my second reaction to Vagabond Republican Donald Trump’s denunciations of race, generation, diversity, faith, disability, etc. Nothing will deter me from bringing down anyone that hates Gods creations; made in his own admirable image! Hence, thou shall not devour Gods beautiful creations at any given opportunity.

For follow-ups and reference purposes, previous published articles are under captioned:

God blesses anyone he so wishes and desired but wealthy folks and folks aspiring for positions must be mindful of the less privileged and vulnerable who are also considered significant in any society. The world is a learning curve, but nothing to learn from Tramp Trump, he is just another divisive devil incarnate slowly manifesting himself, formally through entertainment, now through politics.

President Barack Obama in his last days in office, is trying to unify the world with America, while vagabond Donald Trump is busy untiring neatly twinned - effortless efforts; calling a generation of people primitive names, giving bad accolades, etc. This is very usual, spearheaded by any American Presidential aspirant in history. It is very important to educate Tramp Trump, no man is an island nor his businesses, neither himself, an immigrant to the United States.

By procrastinating Nigerians deportation when President, Nigerians are being called to order, most especially those working at any of your businesses to resign in solidary with their counterparts: Hispanic/Mexicans, Muslims and People with Disabilities.

Tramp Trump, Nigerians in United Sates will continue to do better things for the progressive development of America, regardless of your derogatory statements at them; smartly working for the betterment of socioeconomic development of the country, anywhere they find themselves.

Unquestionably, Nigeria is a special creation by the Omnipotent. Despite all crises and tribulations, survives all odds within and outside Nigeria and even in the United States. Currently, the most populous black nation, well read, well-educated, well-mannered and very smart in the planet. You will be amazed where Nigerians will take this world; better than where we are today! Watch out, Tramp Trump, its coming sooner than later.

Needful to assure Tramp Trump being scary of immigrants, that overtime a Nigerian will contest the United States Presidency and win, reasons the likes of you and sponsors are catastrophically naïve and afraid of all your businesses, envisaged to crash sporadically in a jiffy. Notably your proclamations will remain in the minds of all affected, regardless of your interconnectivity and wealth.

Confidently, one can say all people disrespected by Tramp Trump at this campaign are fussing together, forming smaller groups and expanding upon huge groups, joining force; praying and fasting against Vagabond Trump.

This poll will not only serve as a disgrace but as generational curse, which will be part of his learning curve to be a respecter of humanity irrespective of his wealth. Picking on Nigerians is his greatest mistake ever made in this campaign, Nigerians all over the world are embittered!

It is very necessary to bring abrupt stop to Tramp Trump excesses, building more hatred for America. Maybe one can claim this is “Another slave mater in disguise!” No wonder the British Parliament are re considering banning his entrance to England, despite he claims to have £700 million golf investment. If it is true, then he is not a patriotic American. Claims immigrants are taking Americans jobs and why outsourcing Americans’ jobs.

Birds of the same feather flock together; Sarah Palin Endorses Donald Trump, Rallying Conservatives. The continuous denunciation of humanity is increasing the interests in minorities, immigrants, people with disabilities, to vote in block as to who befits White House and of course not Donald Trump.