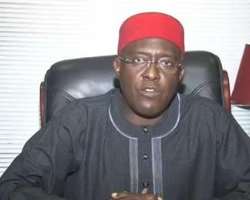 The Federal High Court sitting Abuja has granted bail to the embattled National Publicity Secretary of the Peoples Democratic Party, PDP, Mr. Olisa Metuh, to the tune of N400million.

In a bench ruling this afternoon, trial Justice Okon Abang ordered Metuh to produce two sureties who must deposit the sum of N200m each.

The court maintained that the sureties must not only be residents in Abuja, but also owners of landed â€Žproperties within the Maitama district of the FCT.

â€ŽThey are to submit the Certificate of Occupancy of the properties to the Chief Registrar of the court for verification, as well as submit their three years tax clearance.

According to the court, the sureties â€Žmust swear to an affidavit of means and also submit two recent passport photographs.

More so, Justice Abang ordered Metuh to surrender his international passport to the Chief Registrar of the high court.

â€ŽThe PDP spokesman who was remanded in Kuje Prison last Friday, was brought to court this morning in handcuffs.â€Ž

He was brought to court in a prison bus with registration No. PS-682-AO.

Metuh is answering to a seven-count criminal charge that was preferred against him by the â€ŽEconomic and Financial Crimes Commission, EFCC.â€Ž

The charge marked â€ŽFHC/ABJ/CR/05/2016, was signed by the Assistant Director, Legal & Prosecution Department of the EFCC, Mr. Sylvanus Tahir.â€Ž

The charge against Metuh borders on alleged money laundering, breach of trust and criminal diversion of public funds.

The fund which was withdrawn from an account the Office of the NSA operated with the Central Bank of Nigeria, CBN, was allegedly transferred to Metuh through account no. 0040437573, which Destra Investments Limited operated with Diamond Bank Plc.

EFCC insisted that whereas the fund was earmarked for campaign activities of the PDP, it said that Metuh diverted most of it to his personal use.

â€ŽIt alleged that Metuh converted â€Žpart of the money to one Million US Dollars which he used for his personal business.â€Ž

Besides, Metuh was alleged to have transferred the sum of N21.7m to another chieftain of the PDP, Chief Tony Anenih.

The court had earlier â€Žfixed January 25 to commence full-blown hearing on the matter.â€Ž