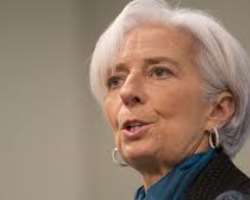 The International Monetary Fund (IMF) has projected 3.4 per cent global economic growth for 2016, indicating an increase of 0.3per cent over last year's growth rate of 3.1per cent.

The World financial body has equally forecast a growth rate of 3.6per cent for 2017, pointing out that the pickup in global activity is projected to be more gradual than its forecast of last October, 2015 World Economic Outlook.

It said these projections are primarily for emerging market and developing economies.

The report, which was released yesterday in London and Washington DC, painted a slightly different outlook for developed economies, saying recovery is expected to be modest and uneven.

'In advanced economies, a modest and uneven recovery is expected to continue, with a gradual further narrowing of output gaps, the IMF said, adding that the picture for emerging market and developing economies is diverse, but in many cases challenging.

It said however, that most countries in sub-Saharan Africa, will see a gradual pickup in growth, saying with lower commodity prices, to rates that are lower than those seen over the past decade, this mainly reflects the continued adjustment to lower commodity prices and higher borrowing costs, which are weighing heavily on some of the region's largest economies, including Nigeria,  Angola  and South Africa,  as well as a number of smaller commodity exporters.

The IMF also revised downward by 0.2 percentage point overall forecasts for global growth for both 2016 and 2017, stating that these revisions reflect, to a substantial degree, 'but not exclusively, a weaker pickup in emerging economies than was forecast in October.

In terms of the country composition, it said, the revisions are largely accounted for by Brazil, where it linked the development to the recession caused by political uncertainty amid continued fallout from the Petrobras investigation, which it pointed out, is proving to be deeper and more protracted than previously expected.

It warned that unless the key transitions in the world economy are successfully navigated, global growth could be derailed. It said unless the  downside risks,  such as the slowdown and rebalancing of the Chinese economy, lower commodity prices and strains in some large emerging market economies, are addressed, they will continue to weigh on growth prospects in 2016-17. Agency report