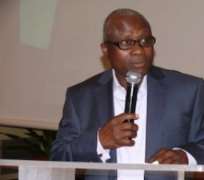 The Lagos State Government says 92 people who had contact with the Lassa fever patients are currently being followed up, even as it allays fear on the outbreak of the disease.

Lagos State Commissioner for Health, Dr. Jide Idris at a press conference on Saturday, called on residents to remain calm over the outbreak of Lassa fever, and assured that the state government is doing everything possible to curtail the spread of the virus in the state.

Idris said in line with international standards, 92 persons who had direct and indirect contact with the index case are currently being followed-up.

He confirmed that the index case, a 25-year-old male undergraduate of Ahmadu Bello University, Zaria, Kaduna State, was reported to have fallen ill after arriving in Lagos and was taken to Ahmmadiyyah Hospital, Ojokoro on 9 January with complaint of fever, sore throats and difficulty in swallowing.

He said the patient was subsequently placed on admission for six days and was thereafter referred by the said private hospital to the Lagos University Teaching Hospital (LUTH) on January 14, 2016 owing to the fact that the fever was persistent and his condition was not improving.

According to Idris, the patient was confirmed as a case of Lassa fever on January 15, at LUTH, and is currently being managed to the extent that his condition is now stable.

Idris added that 15 in-patients who were admitted alongside the index case as well as 25 health workers who attended to them have been placed on compulsory 21 days monitoring, and that the phone numbers and addresses of the persons in that category have also been collected for proper tracking.

He emphatically said that any of the persons in that category with temperature above 38.5, would be isolated so as to prevent the spread of the disease, especially as they maintain little or no contact with others, at least for now.

“Though Lassa fever and Ebola Virus Disease belong to the same Viral Hemorrhagic fever group, Lassa fever is milder and can be treated and cured if detected early. Therefore, any persistent fever should be reported to the nearest public health facility.

“Residents are urged to watch out for the signs and symptoms of Lassa fever which typically occur with incubation period of 1-3 weeks after the patient comes into contact with the virus. Early symptoms of the disease include fever, headache, chills, diarrheas, nausea, vomiting, sore throat, backache, and joint pains.

“Late symptoms include bleeding from the eyes, ears and nose, bleeding from the mouth and rectum, eye swelling, swelling of the genitals and rashes all over the body that often contain blood. It could progress to coma, shock and death,” he said.