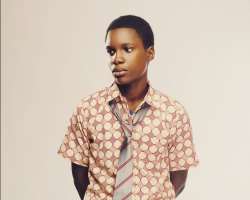 we had the chance to sit down with Samuel Robinson‎ an up and coming actor who has mastered the art of flawless role interpretation. The young actor has been acting for two years and has worked on projects such as Desperate Housewives Africa, Tinsel, Shuga, 8 Bars And A Clef ( 8barsandaclef.com ) to mention a few.

2) Having just been in the acting business for a couple of years, can you give us a slight insight into what Nollywood is like?

Acting in Nollywood is not as easy as one may think. It takes a lot of hard work and commitment to make a name. But it is very profitable in the long run. I enjoy working in Nollywood and I don’t intend on stopping soon.

3) What was it like working on projects such as Desperate Housewives and Tinsel?

Desperate Housewives Africa was a tremendous opportunity for me to learn from working with veterans. The knowledge I gained from working on‎ the show turned out to be priceless.

Working on Tinsel gave me my first major break in the industry. Being on the show exposed me to better work opportunities which has contributed majorly to my career.

4) What role did you play in these household favourites and how have they impacted your career?

I Play the role of Akin Bello on Desperate Housewives Africa. Playing Akin helped me tap into and master a deeper emotional side of my acting ability. I am more confident now to play strong emotional roles after playing Akin.

5) Which Nollywood actors and actresses would you like to work with next?

I would absolutely love to work with Genevieve, R.M.D, Rita Domonic, Kehinde Bankole, Nse Ikpe-Etim and OC Ukeje. They inspire me and I hope I get a chance to work with them soon.

6) Internationally, which actors and actresses do you admire?

7) What’s the process you take when getting into character?

I take my time to do thorough research on characters I take on. I want to know what the character is feeling and thinking in every scene. I think I have mastered script context interpretation.

8) What projects are you currently working on?

I just finished work on a film called Green White Green and i’m currently working on a project in Calabar called The Governor by Ebonylife Tv with Hollywood actress Caroline Chikezie. It had been amazing so far and is definitely one to watch out for.