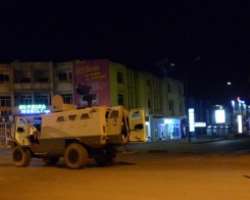 Troops set up a cordon around the Hotel Splendid, where hostages are being held by Al-Qaeda-linked gunmen in a siege that has already left at least 20 people dead (AFP Photo/Ahmed Ouoba)

Witnesses say the upscale hotel in Burkina Faso’s capital that has been attacked by al-Qaida militants has now caught fire. The blaze began after commandos trying to free an unknown number of hostages used explosives to enter the building.

Security forces stormed the building more than five hours after it was attacked by jihadists. A fire then broke out in the hall of the Splendid Hotel, and the flames then began spreading inside and out.

Several cars outside the hotel also were engulfed in flames after the attackers set them on fire when they launched their assault.

It was not immediately known how many people may have been killed during the siege, though a survivor told hospital director Robert Sangare he estimated the toll could be as high as 20.

A fire raged at the main entrance and screams could be heard from inside Ouagadougou’s four-star Splendid hotel, which often has UN staff among its guests and has security checks at its entrances.

The attack comes less than two months after a jihadist hostage siege at the luxury Radisson Blu hotel in the Malian capital Bamako in which 20 people died including 14 foreigners — an attack claimed by the same Al-Qaeda affiliate as the unfolding Ouagadougou assault.

The French ambassador to Ouagadougou Gilles Thibault announced the beginning of the assault on Twitter.

“The assault has started, the various components of the armed forces and security forces have begun their missions,” Thibault said.

Officials had earlier said French forces could join a counter-attack on the hotel, but Thibault did not clarify if they had joined the initial rescue mission.

“We know that there are victims and there are hostages. Currently the area is blocked by security forces waiting for an assault to free the hostages,” Foreign Minister Alpha Barry told AFP earlier.

Around 10 vehicles were on fire in the streets near the 147-room hotel in Ouagadougou, not far from the city’s international airport.

The head of the city’s main hospital confirmed at least 20 dead and another 15 injured. Firefighters were also at the scene.

A restaurant opposite the hotel was also attacked and a staff member, reached by telephone, said several people had been killed, but was not able to give an exact toll. Al-Qaeda in the Islamic Maghreb (AQIM) claimed responsibility for the attack saying it was “revenge against France and the disbelieving West”, according to US-based monitoring group SITE.

The “mujahideen brothers” of AQIM “broke into a restaurant of one of the biggest hotels in the capital of Burkina Faso, and are now entrenched and the clashes are continuing with the enemies of the religion”, SITE quoted the group as saying.

The attackers were members of the Al-Murabitoun group based in Mali and run by Mokhtar Belmokhtar, SITE said.

Barry said Burkina Faso may enlist the support of French special forces, who have a permanent presence in the country, to deal with the unfolding situation, and a US defence official, speaking on condition of anonymity, said Washington could provide drone-based surveillance.

An AFP reporter at one point saw three men clad in turbans firing at the scene on Avenue Kwame Nkrumah, one of Ouagadougou’s main thoroughfares. A witness also reported seeing four assailants who were of Arab or white appearance and “wearing turbans”.

The French embassy said on its website that a “terrorist attack” was underway and urged people to avoid the area. An Air France flight from Paris to Ouagadougou was diverted to neighbouring Niger.

The Burkinabe army meanwhile said an armed group had also carried out an attack earlier in the day near the border with Mali, killing two people.

“In the afternoon around 2:00 pm (1400 GMT), around 20 heavily-armed unidentified individuals carried out an attack against gendarmes in the village of Tin Abao,” the army said in a statement, adding that an officer and a civilian had been killed and two people were wounded.

Several attacks have taken place in Burkina Faso in recent months, but no such assaults had hit the capital.

In April the Romanian security chief of a mine in northern Tambao was kidnapped in a move also claimed by Belmokhtar’s Al-Murabitoun group.

Burkina Faso is part of the G5 Sahel grouping that counts the fight against terrorism as part of its remit.

Last month, Burkina Faso swore in Roch Marc Christian Kabore as president, completing the troubled West African state’s transition after the overthrow of its longtime ruler Blaise Compaore in 2014 and a failed coup attempt in September.