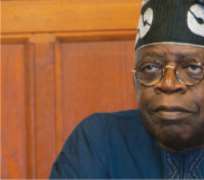 National Leader of the All Progressives Congress (APC), Asiwaju Bola Ahmed Tinubu, yesterday refuted a report in an online platform, Newswire, alleging that he flayed the defection of some Peoples Democratic Party (PDP) members to APC.

He described the report as a figment of the imagination of the platform's reporter and a plot to cause disaffection within the ranks of the APC.

The report had quoted the APC leader as saying that the mass defection of the PDP members to APC might have grave consequences on President Muhammadu Buhari in 2019.

Tinubu observed that Newswire and a section of the social media were being used by the PDP for a concerted campaign against his person.

He recalled, for instance, a recent report by that section of the social media linking him with the decision of The Nation newspaper to return the N9 million it got through the Newspapers Proprietors Association of Nigeria (NPAN) as compensation for the disruption of its operations by security agents last year.

The APC leader wondered why he would be linked with the return of the said sum when he is not involved in the running of the newspaper and did not know about NPAN's decision to ask for compensation.

The report by Newswire had quoted the APC leader as expressing fears that the influx of PDP members would 'crumble the APC, especially if President Buhari decides to do just a term.'

The report further quoted Tinubu as saying: 'The President Buhari I know has very good intentions for Nigeria and he would want to hand over to someone he deems not to be corrupt.

'It is even possible that the President already has a successor in mind. And the danger is this: at the fullness of time, these PDP defectors will form an unholy alliance with some politicians in APC and across the board to thwart the President's succession plan. And that will be the end of the APC and a new rising for the PDP.'

'I'm not elated about the news of former senators and even serving ones defecting to the APC. Even if a governor from the opposition defects today, I will not celebrate it.

'I think the President should be leery and extremely cautious of these PDP defectors and should not give them any serious responsibilities because at the appropriate time, they will manifest great evil and disaster against the President and the APC.'

Tinubu, however, said he did not grant any interview to any news medium and could never have said what was ascribed to him.

He said it was a hatchet man's job aimed at causing disaffection in APC.

'It is not the first time that kind of story would be ascribed to me even though I did not grant anyone an interview. It is a hatchet man's job whose purpose is to cause disaffection in our great party,' he said. Agency report