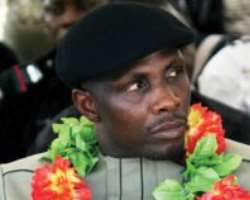 Both are to be arraigned on a 40 count charge of alleged money laundering, conspiracy, stealing and diversion of funds. Aside Tompolo and Akpobolokemi, four other persons alongside four companies are also to be arraigned according to spokesman of the EFCC, Wilson Uwujaren.

'The suspects allegedly diverted the sum of N34 billion which accrued from the public private partnership agreement between NIMASA and Global West Vessel Specialist Limited for personal use', Uwujaren said, adding that the commission had secured an order of the Federal High Court to serve the summon and charge on Tompolo by substituted means as 'the suspect has continuously evaded service'.

The order by Justice Ibrahim Buba allows the EFCC to serve the defendant through substituted means by affixing the summons and charge on a conspicuous part of his known address situated at No. 1 Chief Agbanu Street, DDPA Extension Warri, Delta State.

It would be recalled that Tompolo last year failed to honour the invitation by EFCC twice despite the commission's threat to declare him wanted. He was summoned for questioning over a N13 billion fraud allegation that relates to the land acquired for the establishment of Maritime University in Okerenkoko of Delta State. But he failed to honour the invitation; and the anti graft commission, did not declare him wanted as threatened. The said amount was allegedly paid to Tompolo by NIMASA under the tenure of Akpobolokemi.

The ex-NIMASA DG himself, has a N35.1 billion case to answer in a case being prosecuted by the EFCC. The charges were filed after Akpobolokemi was re-arrested by the anti graft agency in front of the Federal High Court in Ikoyi, Lagos.

The former DG was arrested December 14, after his trial was adjourned by Justice Ibrahim Buba of the Federal High Court, Lagos, where, alongside five other individuals, he is facing criminal charges to the tune of N2.3billion filed against them by the EFCC.

Akpobolokemi's arrest is on the strength of fresh evidence that he allegedly converted the sum of N11.7 billion and another N816 million totaling N12.9 billion meant for the development of the temporary site of the proposed Nigeria Maritime University, Kurutie, Warri South Local Government area of Delta State, for his personal use.

The suspect was said to have obtained a presidential approval of N13 billion through the office of the then National Security Adviser to President Goodluck Jonathan, Colonel Sambo Dasuki( retd) for the acquisition and development of a temporary site for the Nigeria Maritime University.

Out of the total approved amount, the sum of N11.7 billion was allegedly paid into a company suspected to be owned by Chief Government Oweize Ekpemopolo a.k.a Tompolo. After the said money was paid, investigation further showed that N6 billion was further moved into another account belonging to one of the associates of the indicted DG.

Also, the sum of N816 million allegedly obtained through a presidential approval for the Voluntary International Maritime Organisation Members State Audit( VIMSAS) implementation in Nigeria, was allegedly diverted to his personal use. - Guardian.