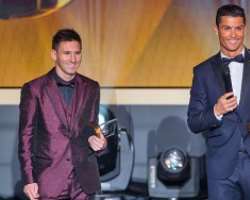 Lionel Messi and Cristiano Ronaldo attend a press conference prior to the FIFA Ballon d’Or at the Kongresshaus on January 11, 2016 in Zurich, Switzerland. Messi’s named has been daubed on a statue dedicated to Ronaldo. PHILIPP SCHMIDLI/GETTY IMAGES

Lionel Messi and Cristiano Ronaldo, the world's two best footballers, have long had a storied rivalry on the pitch.

The intensity was ratcheted up to new levels on Tuesday night, after a statue built in Ronaldo's honour in his home town of Funchal, on the island of Madeira, was defaced with pro- Messi graffiti.

AS, the Spanish sports newspaper, reported that the slogan “Messi 10 ”, referring to the Argentine and the number he wears for his club Barcelona, was daubed on the statue, which bears the phrase “Best player in the world”.

Ronaldo, the Real Madrid player, was beaten to the FIFA Ballon d'Or by Messi on Monday night at the annual ceremony to mark the world's greatest footballer . The Portuguese star had won the award the past two years. The newspaper quoted Katia Aveiro, Ronaldo's sister, saying: “This is a disgraceful act of vandalism in itself but just shows the levels of jealousy that exist. As a Portuguese citizen it embarrasses and saddens me. This island is clearly still inhabited by savages who have no respect and don't know how to live in a respectable society.”

Ronaldo and Messi have both frequently sought to downplay their rivalry, which is based far more on their respective statuses as the world's pre-eminent players than any personal enmity.

In June 2015, Messi claimed that there had never been a rivalry between him and Ronaldo, rubbishing it as an invention of the media .

Clearly, some of his fans would beg to differ.