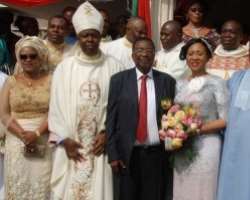 Former governor of old Anambra State, Senator Jim Nwobodo on Saturday  re-wedded his  heartthrob many , Patricia in the Catholic Church.

Nwbodo, a born Anglican had wedded Patricia in the Anglican Communion in the early 80s .

But he decided to seek another matrimonial ordinance, this time in the Catholic Church, following his disagreement with the leadership of the Anglican Communion when his son, Ifeanyi died‎. The burial site of his son generated a big controversy.

Not a few found the action of the former governor surprising as he was hitherto, a staunch Anglican. He single-highhandedly built the multi-million naira St. Mathew's Anglican Church in his hometown, Amechi, Awkunanaw in the 70s.

The controversy over the burial place of his late son, by his first wife,  pitched Nwobodo against  the church into which he was born, as the leadership of the curch sttod by the former wife.

Nwobod insisted that the his son would not be buried with his expanse compound but be buried in a land close to the compound.