US donates $11m mine resistant vehicles to Nigerian army 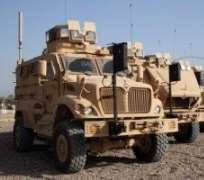 Support came the way of Nigeria in the fight against insurgency from the United States in a bid to fulfill its promise of helping the country fight the Boko Haram insurgency with the donation of 24 mine-resistant and armor-protected vehicles to the Nigerian Army.

The vehicles, which are valued at $11m, would be handed over to the military authorities at the Nigerian Army 9th Brigade Parade Ground, Ikeja Army Cantonment in Lagos.

A statement issued by the Public Affairs Section of the United States Consulate General Lagos on Wednesday reads: “The US is pleased to donate 24 Mine-Resistant, Armor-Protected (MRAP) vehicles valued at $11m to Nigeria's military authorities.

“The equipment donation represents part of the continuing US commitment to Nigeria and its neighbours to counter Boko Haram's senseless acts of terror and promote regional security.”