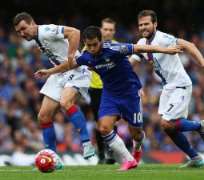 Eden Hazard 's stunning collapse during the 2015-16 season could see him leave the Premier League.

Hazard, 25, has failed to score a single goal in 27 outings for Chelsea across all competitions and his poor form has coincided with the Blues battling against relegation instead of for the title.

The Daily Mail is reporting that Hazard has made it clear to close friends that he intends to leave Stamford Bridge this summer which has alerted both Real Madrid and Paris Saint-Germain to the possibility of signing the Belgian wizard. Bayern Munich are also said to be interested but Chelsea are looking for at least $131 million — just short of a world record transfer fee — if they're going to sell Hazard.

PSG are confident of bringing Hazard back to France as the Belgian national team star made his name in Ligue 1 with Lille. However, Real Madrid would be serious contenders for his signature and new manager Zinedine Zidane has heaped huge praise on Hazard in the past. Bayern may be a long shot but with Franck Ribery and Arjen Robben coming towards the end of their illustrious careers the German giants may move to bring in a high-profile winger.

Yes, Hazard only signed a new five-year deal in February 2015 but after he and Jose Mourinho are said to have fallen out it is believed the Belgian wants a fresh start elsewhere. He also wants to remain playing in the UEFA Champions League and with Chelsea currently languishing in 14th place in the PL and 13 points off the top four, it seems unlikely they will be battling among Europe's elite next season.