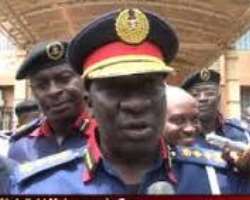 The Nigeria Security and Civil Defence Corps has secured an interim order from the Law Court to sell the vessel named MV flora and the 10,000 litres of illegally refined Automotive Gas Oil(AGO) stored inside the vessel to the Federal Government of Nigeria in line with section 263(11) of the Criminal Procedure Act.

According to the statement from the spokesperson of the NSCDC, ACC Emmanuel Okeh, said"The court order therefore directed the Corps to auction the seized items upon advertisement in the national dailies".

Similarly, the court granted an order directing the Corps to sell vessel "MT TORA EAGLE" and 3,600 drums of illegally refined Automotive Gas Oil (AGO) stored therein, as well as a Truck and 10 drums of stolen Crude .

The Corps before now embarked on a tour of the various sites of seized items across the Federation with the Committee on Forfeited Items set up by the former Attorney General of the Federation , Muhammed Adoke , to ascertain the conditions of the items.

The Commandant General of the NSCDC, Abdullahi Gana Muhammadu , who made these declarations stated that in the year under review, over 40 suspects have been prosecuted and convicted in Delta and Bayelsa States respectively on Vandalism ,Oil theft and operation of illegal refineries.

The Corps, he said, will pursue her mandate vigorously in ensuring that vandalism in which ever form is stamped out.

Also, he reiterated that he cannot but keep appreciating the Chief of Naval Staff for the enormous support the Corps is receiving from him and his personnel.

Gana maintained that, the number of suspects prosecuted and vessels handed over to the Corps by the Naval team after the arrests, showed synergy and partnership in fighting crime and criminality in the area of oil theft.

Using the premise, he called on other stakeholders to emulate the gesture of the Nigeria Navy which acknowledged the mandate of the Corps as the lead Agency in the protection of Critical Infrastructure.

Meanwhile, in the forthcoming re-run election in Bayelsa state on saturday, January 9, 2016 , the Commandant General has directed the deployment of 4000 personnel and Sniffer dogs to provide massive Security before, during and after the election to forestall any break down of law and order.

The personnel have been mandated to ensure a smooth and peaceful election in Bayelsa state.

According to the Corps helmsman, ''I implore the politicians who are vying for the elective office to behave like Statesmen by accepting defeat and victory with an open mind, as violence cannot lead anyone anywhere. Moreover, without the electorate they cannot lead anyone in Bayelsa state and cannot attain the position sought after''.

The Leader of the Corps also appealed to Parents and Guardians not to be tired in admonishing their children and wards not to fall cheap to the unethical behaviour of politicians who use the young ones to cause mayhem.

Gana likewise called on the Independent National Electoral Commission (INEC), that this assignment must be concluded, and one sure way to attain such ,is to be unbiased in piloting the election affair of Saturday.

He implored the people of the State to be law abiding and come out enmasse to exercise their franchise , as the Corps is ready to ensure peaceful election in Bayelsa state.