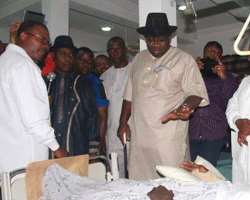 In a nationwide telecast titled World Press Conference, broadcast on A.I.T. this morning, Bayelsa APC Governorship Candidate Mr. Timipre Sylva might have concluded plans to withdraw from the rescheduled elections in Southern/Ijaw and other 104 units in Bayelsa State.

The National Independent Electoral Commission, INEC, has rescheduled the re-run for Saturday, 9th January 2016. Already, INEC has promised to distribute materials to Southern/Ijaw- the largest LGA in Bayelsa State.

Timipre Sylva’s intention to withdraw from the race may be predicated on advice of well-meaning Nigerians who believe that the violence that trailed the December 5th 2015 elections and allegations that the Bayelsa APC is stockpiling weapons to cause more violence in the rescheduled election have filled the airwaves.

When violence is used to subvert the will of the people, it leads to tension which might overheat the polity. Besides, the PDP candidate, incumbent Governor Seriake Dickson has won six (6) out of the seven LGAs where elections were held in December last year.

If the APC Candidate withdraws from the race, then he would have exercised the spirit of good sportsmanship without the luxury of breaking limbs, maiming youths and shedding innocent blood. Bayelsans are just waiting for such gestures from the APC candidate and would appreciate this spirit. Bayelsans are waiting for an official statement from the APC campaign office to that effect.