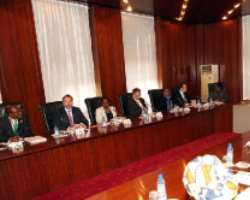 BEVERLY HILLS, January 05, (THEWILL) – President Muhammadu Buhari has announced that an inter-ministerial committee will soon be established to speed up the re-organization and reformation of the Nigerian National Petroleum Corporation (NNPC).

Speaking at a meeting with Jin-Yong Cai, Chief Executive Officer, International Finance Corporation (IFC), at the Presidential Villa, on Tuesday, Buhari declared that the reformation of the NNPC had become inevitable in view of the corruption and abuse of its present structure in the recent past.

The President also cited Nigeria’s current need to maximize income from every source of revenue as a further imperative for reforming the NNPC.

He said that his administration was doing everything possible to boost national revenue so that it can effectively implement its programme of change and significantly improve the living conditions of Nigerians.

Mr. Jin-Yong Cai, who is also the Vice President of the IFC, told President Buhari that with proper reformation and re-organisation, NNPC could become Africa’s largest company. (R) President Muhammadu Buhari being presented with a book from the Executive Vice President and CEO, Mr Jin-Yong Cai (L) after a meeting with the IFC Team, at the State house.

(R) President Muhammadu Buhari being presented with a book from the Executive Vice President and CEO, Mr Jin-Yong Cai (L) after a meeting with the IFC Team, at the State house.

“You have brought monumental changes since you got to power. You have brought in strong leadership and Nigeria has the opportunity under you to become highly reputable,” he told president Buhari.

“In NNPC, you can create an entity that is dominant in Africa, and this is the right time to do it, with the momentum you have created.”