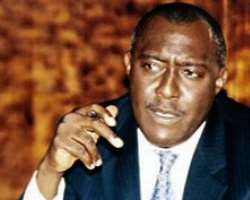 The National Publicity Secretary of the Peoples Democratic Party (PDP), Mr. Olisa Metuh, was on Tuesday   arrested by officials of the Economic and Financial Crimes Commission

The anti-graft agency stormed Metuh's Abuja home in the  morning and was asked him  to follow them to the commission's headquarters.

A statement by Richard Ihediwa, the special assistant to the party's national publicity secretary,  said the operatives who were four in number came in a White unmarked Toyota Hiace bus, adding that when they were asked the reason for the invitation, the officials stated that he has some issues to clear with the commission.

The special assistant said the commission, however, stated that Metuh was not being arrested but invited, adding that  at the time of issuing the statement, Metuh was still being kept at the commission's headquarters and his lawyers were making frantic efforts to reach him.

He said though details of why Metuh was invited is yet to be made public by the commission, he recalled that severally the PDP spokesman had alerted in various press conferences and statements that he has been under threat and that the ruling party and the government have been very uncomfortable with his stance.

Metuh’s aide said that the latest was outburst and threats by the National Chairman of the APC, Chief John Oyegun in reaction to Chief Metuh's criticisms of President Buhari's widely criticized response on government's disobedience of court orders, during the last Wednesday's Presidential Media chat.

The special assistant said the office of the national publicity secretary will keep the public updated on any development on the issue.

Meanwhile, a former National Chairman of the Peoples Democratic Party, Haliru Bello Mohammed, was on Tuesday arraigned before a Federal High Court in Abuja on corruption charges.

Bello came to the court on a wheel chair. He was arraigned with his son, Abba.
They are accused by the Economic and Financial Crimes Commission of money laundering alongside their company, BAM Projects and Properties Limited.

They were said to have been a part of the group that collected money from the Office of the then National Security Adviser, retired Colonel Sambo Dasuki.

Abbah was specifically alleged to have received N600 million from Dasuki in the name of Bam Projects and Properties.

Mohammed and Abba on Tuesday pleaded not guilty to the four count charge levelled against them.