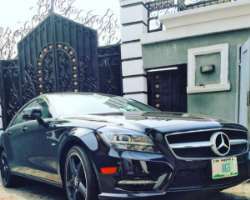 BEVERLY HILLS, January 05, (THEWILL) – Ghanaian actress Juliet Ibrahim is one celebrity many can't get enough of thanks to her gentle demeanor and her incredible style.

The actress then took to Instagram to share a truly inspirational story of her past and how she came to be a host at the high profile event.

She wrote:
“From being an usher at Glo Caf awards 2007 to being a guest at Glo caf 2012 and 2014 and now to hosting the Glo Caf awards 2015! If Jesus say Yes nobody can say No. When I told my sis that I will be hosting this year’s Glo Caf awards @ssoniaibrahim  asked me; this life is funny do u remember back in the day when u were just an usher for Glo Caf? lol God is an awesome God. Never give up on ur dreams, keep pushing and stay determined. Catch me live on January 7th. @katung_aduwak  u remember the first time I met u? #nobodyweynofittomakeEm  one day I shall tell my story”