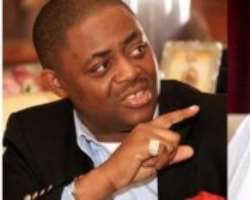 Mr. President, as one of your most loyal and faithful subjects who has nothing but the utmost respect for your person and your office, I am constrained to write you this open letter. This is because there are issues I believe are important for you to clarify and to come clean on. I say this because some of your assertions of late are at best contradictory.

Whichever side of the political divide we are on, I believe  we can all agree on one thing:  The prosecution of the war against terror is not something that any of us should play politics with. This is especially so given the fact that human lives are at stake and the very existence of our nation is under threat. Like much of the rest of the world, our country is going through hell at the hands of  jihadists and Islamist terrorists.

There is no gainsaying that we must all come to terms with the fact that the Islamic State in Iraq and the Levant (ISIL), Al Qaeda, the Taliban, Al Shabab and Boko Haram are nothing but bloodthirsty murderers. They are indeed the scum of the earth, the   troublers of humanity and the vermin of hell. It is with this in mind that I urge you to take the war against terror far more seriously than you are doing and plead with you to stop passing the buck.

Your penchant for blaming your failings in this regard on the previous administration is simply nauseating and it does not serve you well. You continuously contradict yourself when it comes to this matter. We your subjects look up to you for consistency, strength, unequivocal commitment, a firm resolve and the ''leadership from the front'' that you promised during your presidential campaign in this war. We do not want and neither do we need doublespeak, lame excuses and buck-passing.

Permit me to point out a few examples of your contradictory assertions and your buck- passing in this short intervention. Initially, you claimed that your predecessor in office, President Goodluck Jonathan, never bought any arms and that, instead, he squandered and stole all the money that was appropriated for the procurement of arms.

Yet, when the British Minister of Defense visited you in the Presidential Villa the other day, the story changed. You did a u-turn and gleefully told him and the wider world that  Jonathan bought arms with raw cash.

One wonders which story you shall come up with next and which one you will conjure up in the future. Kindly tell us what the position is: Is it that Jonathan did not buy arms at all and stole all the money or is it that he used cash to buy arms? You cannot have it both ways. It is either one or the other.

Glaring doublespeak
Quite apart from your glaring doublespeak on this matter, there was another issue which you ought to have raised with your highly esteemed and respected British guest. You failed to tell him that his was one of the countries that not only refused to sell weapons to us during the course of this bitter conflict but that also helped to impose and enforce the international arms embargo on our country even though we are at war.

This resulted in the unnecessary death of thousands of our people because we found it difficult to procure the weapons to protect them. Your guest's country insisted on toeing the American line and doing this to us, even though we were fighting a war against a relentless, well-motivated, well-funded and well-armed fighting force that Global Terror Index has described as the ''deadliest terrorist organization in the world''.   One is forced to ask: With friends like this, who needs enemies?

Given the fact that the embargo was in place, one wonders how we were supposed to procure arms unless we did so with raw cash in the black market. The alternative was to buy none at all, to do nothing and to allow Boko Haram to take Abuja, Port Harcourt, Enugu and Lagos. Perhaps that is precisely what your Western friends and allies wanted but, thankfully, it never came to pass.

Despite the challenges and constraints Jonathan faced, instead of losing any more ground, he rose to the occasion and retook no less than 22 local government areas and virtually pushed Boko Haram out of Nigeria. The only place that they occupied by the time the election took place was Sambisa forest.

The former President  achieved this with those arms that he bought with raw cash. This is apparently what you are now complaining about. Permit me to remind you that it is those same arms that Jonathan bought with raw cash that your army is still using till today. Yet, sadly, since you were sworn- in as President, seven months ago, you have lost some of those same local government areas that were earlier recovered and they are now back in the hands of terrorists.

'Technical' victory
Despite this, you keep telling the international community and the Nigerian people that we are ''making progress'' in the war against terror. As a matter of fact, you went as far as to say that we had ''won the war'' against Boko Haram and your Minister of Information , Mr. Lai Mohammed, echoed that grotesque mendacity and reiterated that sentiment by adding the words ''technically won'' (whatever that may mean) to the equation.

Sadly, two days later, on Christmas day, in what can only be described as an eloquent response from the terrorists, scores of innocent civilians were killed by Boko Haram in Borno State and a whole community was burnt to the ground. Again, on Sunday, December 27, Maiduguri, the capital of Borno State, came under heavy attack from the terrorists. Yet again, on Monday, December 28, in Adamawa State, Boko Haram launched a series of suicide bomb attacks in which at least 50 civilians were killed. So much for having ''won the war against Boko Haram'', whether ''technically'' or otherwise.

Curiously, the next thing that you did was to tell Nigerians that you would ''persuade Boko Haram to drop their arms''. One is compelled to ask: Why would you have to persuade them to drop their arms if you had already defeated them and won the war against them?

Persuasion as a weapon
In any case, this would be the first time in the history of modern warfare that a sitting President has sought to destroy and defeat a vicious and relentless terrorist organization and win the war against terror simply with the awesome and devastating weapon of persuasion. Perhaps you should recommend that same tactic to the Americans and the rest of the international community as an effective and credible weapon to adopt in their war against ISIL, Al Qaeda, Al Shabab and all the other jihadist groups that plague the world.

Whilst you are at it, perhaps you could also persuade Boko Haram to free the Chibok girls. It is disturbing to note that despite all your campaign promises and assurances that once you are elected President the girls would be rescued or returned, nothing has been done or heard about any of them ever since you were sworn- in. Worste still, the Bring Back Our Girls group, which was essentially an appendage of your election organization, together with its distinguished leaders and conveners, appear to have gone very quiet. I guess they are busy trying to persuade Boko Haram to drop their arms too.

Sadly, you appear to be detached from reality. Instead of fighting the war against terror, you are making it worse with the killing of Shia Muslims in Zaria on December 12, locking up their leader Sheik Ibrahim El Zakzaky and opening yet another war front in our country. The last thing that we need is for Hezbollah or the Iranian Republican Guard to rise to the occasion, take up the challenge, jump into the fray and decide to protect and avenge their Shia Muslim brothers and sisters in northern Nigeria.

Yet, despite the reprehensible and indefensible actions of your military commanders in Zaria, you have refused to show any remorse for what was undoubtedly a war crime against fellow Nigerians and you have not prosecuted the officers and military personnel that were involved in the butchery. Instead the homes of the victims and those that share their Shia faith have been burnt to the ground in Zaria and their graves and burial sites have been dug up and desecrated.

Cameroonian attack
Worse still, you have refused to defend our country. I say this because a few days ago the Cameroonian military invaded our country, violated our territorial integrity and savagely murdered over 70 Nigerians in their village before burning it down.

Your government refused to acknowledge that this event even took place, despite media reports. You did not console or express condolences to the families of the victims or retaliate against the Cameroonians.

You did not even warn them or demand an apology or reparations from them. It could not have happened under Jonathan, Obasanjo, Babangida, Shagari, Abacha, Abubakar,   Shonekan, Mohammed,   Balewa or indeed any other former Nigerian President or Head of State. If any of them had been in power and the Cameroonians cultivated the effrontery to do such a thing, there would have been consequences.

State – sponsored tyranny
You refuse to tell the world that our military is terribly demoralized, our soldiers are suffering heavy casualties and are not being paid their salaries regularly and, worst of all, you have failed to procure a single bullet or weapon for them to use in the last seven months since you came to power.

Instead of deploying all the power of the state against Boko Haram, you have spent all your energy and resources trying to teach the former National Security Advisor, Colonel Sambo Dasuki, and all your other perceived enemies the lesson of their lives by misrepresenting them before the world, subjecting them to state-sponsored tyranny and the most insidious form of persecution, violating their human rights and telling the world that they stole and shared money that was meant for the purchase of arms.

You have also misinformed the Nigerian people about the rules and conventions that are applied when it comes to the administration of security funds and about the fact that it is the National Assembly alone that has the right to probe the use of such funds as part of their oversight functions. To cap it all, you have claimed you did not receive any benefit from the NSA 's office whilst Jonathan was in power. This is an assertion which we all know is, at best, questionable.

You must understand that any leader or government that is motivated by bitterness, fear, hate, vengeance and malice will eventually hit the rocks and crash like a pack of cards. You must appreciate the fact that God is watching and that He sees and knows all.