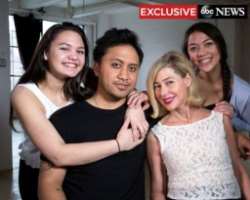 It was a scandal that rocked the nation. A 35-year-old teacher was dating her 13 year-old student. I remember it like it was yesterday though it was nearly 20 years ago. So when I heard that Barbara Walters was doing a follow-up special on TV I had to break out the homemade popcorn with extra cheese. What? To think that they're still together, and after all these years! It got me wondering if maybe the bulk of us got it wrong and instead of this kid being a victim who lost his childhood to this deranged teacher, it's actually a love story in disguise…

First of all, I discover some interesting facts that I never really knew, or had forgotten. Like the fact that Mary Kay Letourneau was already married with four kids when she got pregnant by 13-year-old Vili Fualaau. It was then that the scandal broke, her marriage ended, and she was sent to prison for a few months under the condition that she would stop seeing Vili. However, not a month after her release, she was arrested a second time. Mama just couldn't stay away from the kid. This time, the judge was infuriated and sentenced her to the full seven years that she should have gotten the first time around. But it didn't end there, she was already pregnant with Vili's second child, which she gave birth to in prison. By the time she was released in 2004, Vili was over 18-years-old so they were able to resume their relationship and married in 2005. Today, they live in the same Seattle town with their two daughters who are now 16 and 17 years old. Talk about drama!

I'm listening to this re-cap and it's hard for me not to think, poor kid. He came from a broken home, and here's this beautiful teacher–he said she looked like a movie star–who is showing him more attention than he's probably used to. Of course, he fell hard. Next thing you know he's a father with two kids and she's in prison. Of course, he waited for her to get out. Where was he going to go as a high school dropout with two kids? Plus, whenever people try to keep two lovers apart they become that much more determined to be together. Forbidden love tastes that much sweeter.

What pissed me off more than Mary Kay's refusal to avoid this kid's advances was her refusal to acknowledge that she'd done anything wrong. From lying to her former husband to dating a minor. She even admitted that she never expected jail time. I'm looking at this woman, like, Seriously? Did you think this was a romance novel?! Then I realize that it's her sense of entitlement that's freaking me out. Why shouldn't she be able to have this broken Somoan kid if she wanted? It's interesting because her story is eerily similar to that of her father who was a Congressman and college professor who had two children with his mistress, who just happened to be a former student? Mary Kay talks about her parent's break up and ultimate reconciliation as if it's the greatest love story told to man. So I'm looking at Vili like he never had a chance.

And then Barbara turns her attention to Vili. She wants to know how he's dealt with dropping out of school, his brushes with the law, alcoholism and depression.

He says for years the situation left him traumatized. “If you're going to call someone a victim make sure that that victim is getting all the help they want and need. There was no real guidance or help on how to figure this out.”

There was also a feeling of hopelessness around wanting to express himself and be understood, but not being able to do that because of his lack of education. Today, when he starts feeling sad about this part of his life he chooses to focus on the beauty that came from it and where he can take that.

When asked how he'd feel if one of his own daughters wanted to date a teacher he says he wouldn't encourage it because you don't know what you want at that age.

I start rethinking this idea of Vili as a victim. Yes, his life hasn't been easy, but he seems incredibly self-aware and appears to be a solid father and husband. His daughters know how their parents met and appear to be very well adjusted. He's a DJ and Mary Kay is a legal assistant. They're still together when half of all marriages end in divorce. They still live in the same Seattle town so nobody ran or is hiding. Is he a victim? He doesn't see himself that way. Perhaps he never bought into that label or shunned it once he realized that victims really don't get no help.

He told Barbara he was able to deal with his depression when he decided that his problems weren't going to go away by sitting around.

It got me thinking, why am I seeing him as a victim? Does it make me feel good to have someone else to pity? Poor Vili, stuck with the woman he fell in love with at 12-years-old. Even he says he feels 'happy' and 'safe.' Obviously, it's enough for him so it's got to be enough for me. Given everything, I'm going to mind my own business and wish him and his family a nice life.