$2.1b arms deal: Top military officer detained, Anenih to be invited by EFCC 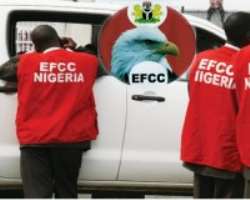 A top military officer has been detained in connection with the $2.1billion arms deals. The officer was a technical aide to a former National Security Adviser(NSA), the late Gen. Owoye Azazi and his successor, Col. Sambo Dasuki (rtd.). The detention of the officer is said to have created anxiety among military chiefs who were involved in arms procurement. A high-ranking military chief was said to be in charge of procurement in one of the services. A top official of the Economic and Financial Crimes Commission (EFCC) confirmed last night that Peoples Democratic Party (PDP) spokesman Olisa Metuh is being investigated for allegedly collecting N400 million from the Office of the National Security Adviser (ONSA). He is likely to be invited for interrogation. It was also learnt last night that the EFCC had invited a former Chairman of the Board of Trustees of the PDP, Chief Tony Anenih, over the investigation. The officer is believed to have been detained in the last two weeks. The military top shot was said to be in charge of the arms bought during the tenure of the two former NSAs. A source said: “The military officer was picked up in connection with the purchase of the arms because he was in charge of inventory and how each unit of the Armed Forces got its equipment. “The EFCC has invited the officer to verify the arms purchase and the delivery status. “This same officer related with many former and serving chiefs. There is no way he can be questioned without involving some of these officers in the military hierarchy. “The arms scandal is messy and many ranking officers were involved. This is causing anxiety in the military because if the detained officer opens up, the probe will lead to more revelations.” Some former Service Chiefs and military officers have been trying to find out what transpired between their detained colleague and the EFCC, The Nation learnt. “These anxious military officers and associates have had limited contact with the top chief in detention facility,” the source said, adding: “The latest dimension of the investigation shows that heads may roll in the military over these arms deals.” It was learnt that the detention of the military officer by the EFCC has raised an inter-service issue. Some officers are said to be “uncomfortable” that the detained officer ought to be questioned by an Armed Forces panel and not EFCC because he did a technical job for the NSA. But, said the source , they have been made to realise that the EFCC is only handling fraud-related matters on the arms deals and not a military probe. “The investigation is at the behest of the President and Commander-In-Chief of the Armed Forces. This mandate empowers the EFCC to question any public or military officer,” he said, pleading not to be named because he is not permitted to speak on the matter. Responding to a question, another source said Dasuki inherited the officer from his predecessor, the late Gen. Owoye Azazi. “Following their good performance and conduct in office, Dasuki retained all the senior military assistants /aides who served Azazi. “Dasuki felt since they had the knowledge of the operation of the ONSA, it was better to allow continuity for a smooth take off in office. “The experience of the officers accounted for the coordination of the war against Boko Haram by Dasuki as NSA. “But while in office, the officers ran purely military errands and managed professional duties.” Also yesterday, there were indications that the agency may interact with a former Chairman of the Board of Trustees of the Peoples Democratic Party(PDP), Chief Tony Anenih. A source said: “I think we are inviting Anenih and a few bigwigs implicated in the arms deals by some of the accused persons. “Some of them will need to explain how they came about the cash given to them and how to effect refund.” It could not be immediately ascertained whether or not Anenih had received a letter of invitation from the EFCC . A former Minister of State for Finance, Amb. Bashir Yuguda, named some PDP stalwarts as the beneficiaries of the cash from ONSA. In a Statement of Witness/ Caution, which he wrote on oath, Yuguda admitted to the EFCC that he gave N600million cash to six chairmen of the Contact and Mobilisation Committees of the PDP for the 2015 general election. He listed the beneficiaries as Bode George( South-West); Amb. Yerima Abdullahi (North-East); Peter Odili (South-South); Attahiru Bafarawa (North-West); Jim Nwobodo (South -East) and North-Central (Ahmadu Ali). George, Nwobodo and Odili have denied collecting cash from Yuguda. George admitted that $30,000 was given to the South-West Contact and Mobilisation Committee. Yuguda also said he instructed Jabbama Limited to transfer N300million to BAM Properties whose account was given to him by a former National Chairman of PDP, Bello Haliru. Bafarawa admitted that he collected N100million from Yuguda through Sagir Attahiru.