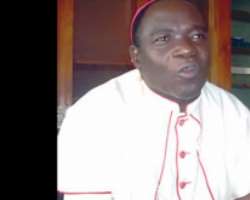 Since the Catholic Bishop of Sokoto Diocese, Matthew Kukah released the bombshell on the Muslim leadership of Northern Nigeria, Muslims have, as usual, been weird in their reactions. Several Muslim writers, critics and organizations have picked holes in Kukah's claims, while some have remained numb to such incisive proclamations from the Reverend at an Islamic function. The cleric described the Northern Muslim elite as hypocritical, insincere and dubious. This description, nonetheless, far from being unacceptable is provocative and an understatement made by such highly-placed cleric in front of Muslims. This has revealed the authority the Reverend assumes in the North. It also depicts a tinge of concealed cosmopolitan misconceptions about Islam and its elite in Nigeria.

Rev. Kukah went bluntly eerie when he proclaimed, “We must locate the current crisis of Boko Haram within the context of the inability of the northern Muslim elite to live by their own dubious creed of being Muslims. They preached Sharia Law but only for the poor. They preach a religion that encourages education, yet their own people are held in the bondage of ignorance.” He succeeded in rubbishing the image of the elite of the largest faith in Nigeria, notwithstanding their contributions in making the country be. In Rev. Kukah's lecture, there was no or little mention of any good done by the Northern Muslim elite.

However, my curiosity was aroused by one serious reaction to the matter. The postulations of the veteran journalist and Daily Trust columnist, Muhammad Haruna in his article of December 29, 2015 titled: Bishop Kukah's attack on Islam, where he concurred with the bishop on Nigerian elite's exploitation of religion for power and wealth, but faulted him for blaming only Muslim elites, especially those from the North, as the only ones who do so were impressive.

More articulate and definite, as it concerns the affected category of Nigerian citizen, were Haruna's words: To see how wrong he (Kukah) is in blaming only Muslims, he needs only to examine the fate Muslims wherever they are a minority in this country or to examine many of the decisions and policies of Presidents Jonathan and Olusegun Obasanjo.

Alas! One cannot hold tears when reflecting on the seemingly connected plots that were crafted against the minority Muslim population in Nigeria between their state governments and the federal government of Nigeria during the reigns of former Presidents Olusegun Obasanjo and Goodluck Jonathan. These two former presidents, unarguably, created the worst religious politics and ethnic estrangement in Nigeria. I would always praise both of them for, at least, upholding the unity of Nigeria, most especially when the Niger Delta and Boko Haram insurgencies reared their ugly faces within the shores of the country. But in terms of the distributions of the national wealth and political positions, there was no trace of fairness and justice.

There was no equality; there was no recognition of all the ethno-religious and cultural components of Nigeria. Worst still, it was as if calculated plans were concluded to frustrate the Southern Muslims and empower the Northern Christians extraordinarily. It was felt by some careful observers as if there were plans to Christianize Nigeria, using the dangerous slogans that the Northerners wanted to Islamize Nigeria; they wanted to implement Sharia; they wanted this and that. And both the former presidents succeeded in their plans by using religion to seek sympathy and cheap popularity. That is why the militancy in the Niger Delta was born, despite other factors. That is why the Boko Haram came to be. And that is why the agitation for Oduduo state and Biafra Republic were nursed and carried out.

Yes, both of the former presidents largely succeeded in their plans. They did not only instigate the state governments of the Muslim minority areas against their minority citizens, they did not give any appointment to any Muslim from the Southeast and South-South, if not in a religious body which constitutionally demanded zonal representation. Their governments were Church-oriented. State governments of the Southeast and South-South have remained resolute in dealing decisively with the Muslim minorities of their states. Any little, I repeat, any slight thing that they do for Islam and Muslims, is basically on political grounds, not because they see Muslims – some of who are from birth places of the governors – as indigenes of their states.

I have not heard the revered cleric, Reverend Kukah, talk about this. I was a journalist and was privileged to attend some functions in the Niger Delta when former President Obasanjo made Kukah, Chairman of Presidential Committee on this and that. I have heard of many powerfully empowered and influential Christians from states of the North where Muslims are over 90% of the populations. Kukah, himself, knows that he is recognized and pampered in the North which is a Muslim majority part of Nigeria.

The influence and unlimited economic and political backings granted Christians in the North has in turn given them a solid base in the political scene of their respective states. In Kaduna state for instance, it is the state policy or it is becoming an accepted norm that for any Muslim governorship candidate to win elections in the state, the candidate must run with a Christian deputy. In Adamawa state that has insignificant percentage of Christians, politics cannot stabilize without the involvement of the Christian minority. In Taraba, the music is even daunting.

We know the bad religious politics, the intrigue and (mis)calculations employed by former President Obasanjo in making Boni Haruna the governor of Adamawa state, in making late Ibrahim Yakowa the governor of Kaduna state and in making Banbaba Danfulani Suntai the governor of Taraba state. Imagine that in a state like Kaduna state, the state civil service is allegedly controlled by the Christian minority. Blind and deaf Nigerians knew why Suntai governed Taraba state from his sick bed for so long after his plane incident. So, who is using religion in Nigeria to dislodge other citizens? This trend must change. Christians of the North should have their shots in Nigerian and their state politics. Muslims of the Southeast and South-South must be empowered and encouraged to live, vote and be voted for in Nigeria and their states. Reverend Kukah and all well-meaning religious clerics, if really they feel for all religious components of Nigeria, should preach this to the governments of Nigeria and Southeastern states of Nigeria.

The Northern Muslim elite have allowed the Christian minority of the North to thrive to the extent that they can boast of Northern Christian elite and some other powerful Christian individuals and organizations. Today, nothing of policy can be implemented in any northern state without serious consideration and involvement of Christians. The opposite is simply the case in the Southeast and South-South.

Apart from Edo state and maybe Rivers, is it in Abia, Anambra, Ebonyi, Enugu, Imo, Akwa Ibom, Bayelsa, Cross River or Delta state that an aboriginal Muslim can be paired with the political and economic influences and strength of Northern Christian minority personalities like Kukah himself, Prof. Jerry Gana, Nenadi Usman, Theophilus Danjuma, Boni Haruna and a lot more. These were made influential directly or indirectly by northern political elite in response to the overpowering pressure from the Southern Christians at home and in Diaspora. The opposite is simply the case in the Southeast and South-South.

On a resounding note, it is very necessary to call for caution here. I am neither a religious bigot nor a freethinker. I have remained a strong advocate of the rule of law and humanity which are both encapsulated in the tenets of both Islam and Christianity. I have continued to advocate for the freedom and full integration of Muslims in the Southeast as well as the Christians of the North. Every Nigerian should be completely free to belong to lawful creeds and societies, within the purview of constitutional limits.

The Muslim/Christian minorities should be allowed/encouraged to participate in the socio-economical and political building of their states and the nation. Those from the Nigerian ethno-religious minorities who possess the capacities to contribute meaningfully and add value to purposeful governance in the country should be recognized, encouraged and empowered. No time than especially now that our religious clerics should stop dabbling into the murky soil of politics in Nigeria and desist from hate and incisive speeches.

Written by Muhammad Ajah, a socio-political analyst and advocate of humanity and good governance.