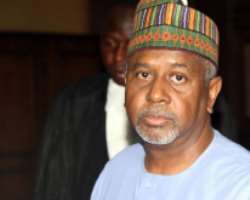 The last time we witnessed the kind of hypocrisy that is going on in the polity in the guise of anti-corruption war was between December 31, 1983 and August 27, 1985 when General Muhammadu Buhari was Head of State. Consequent upon the sacking of the Shehu Shagari government, Buhari, by military fiat, rounded up a vast majority of politicians, especially those who held public offices, and clamped them in detention. From there, many of them who were reportedly found guilty by Tribunals set up to try them on corruption charges were sent to jail- some for as many as between 60 and 100 years.

A few of them were discovered later on not to be corrupt and were left to return home after suffering the humiliation of detention. It is even arguable that some of those that were sent to jail were not corrupt and many of them were actually not as corrupt as the Buhari regime had painted them. What Buhari did was to damage the political class at the time, almost leaving its members with no redeeming features. That was the ultimate objective. In fact, he desperately needed to justify his takeover of power from a democratically-elected government and secure the people's support. The strategy worked very perfectly. But how the patron saint of the war against indiscipline and corruption acted in office thereafter, employing double standard in the pursuit of a number of government policies and programmes, has become a matter of history.

Today, unfortunately for members of the political class, thirty years after that sordid chapter of our political life as a nation, affliction would appear to have befallen some of its members a second time with the emergence of Buhari as president. What they feared most during electioneering has come upon them. He is at the moment engrossed in apprehending those who allegedly looted the nation's treasury. The saving grace this time round for those who are being accused of wrongdoing is that there are no military Decrees to work with. Buhari, as president, has to work with the Constitution of the Federal Republic and other extant laws on the fight against corruption and financial crimes.

This is not even the main issue now. The issue is that Buhari's anti-corruption fight is taking a rather curious dimension. He has seized the former National Security Adviser (NSA) under the immediate past administration, Col. Sambo Dasuki, on a purported massive fraud involving diversion of at least $2.1 billion meant for arms procurement for other purposes. Relevant security and anti-graft agencies have squeezed him; in fact, the Economic and Financial Crimes Commission (EFCC) has charged him to court with the offences of money laundering and breach of public trust. The state agents have continued to re-arrest him each time a court of law granted him bail.

The entire apparatus of the Buhari government has been unleashed on Dasuki and the immediate past government of the Peoples Democratic Party (PDP) under the presidency of Dr Goodluck Jonathan. To me, this is a probe of the Jonathan presidency. If it is not, tell me what it is. It is an unusual kind of probe because Buhari is looking into the security votes of his predecessor domiciled in the Office of the National Security Adviser (ONSA). This is the first time any government both at the national and sub-national levels would embark on this kind of voyage. I had thought that security votes are never queried, let alone probed. Now that Buhari is telling us that they can be probed, the exercise should go the whole hog. Every transaction done under the cover of security votes should be declassified. The same thing should be extended to the states. State governors should be made to dance naked on the expenditure of their security votes.

The impression was initially created that Dasuki swallowed the whole of $2.1 billion meant for arms procurement. The Federal Government has been the one dictating the pace of the so-called botched arms procurement narrative. The manner of its delivery was designed ab-initio to tar the Jonathan administration and the PDP with a brush of malfeasance. It has continued to reinforce the theme of diversion and corruption. Unfortunately for the PDP and the Jonathan administration, no platform has emerged yet for carefully articulated responses. Jonathan has not been able to speak on the issue because it is not that as simple as it looks. Dasuki, the man at the centre of the entire saga, has not spoken either. But he will speak once he has his day in court.

For now, the APC-led government is dictating the entire narrative to favour itself. It is intensifying efforts to ensure that the PDP, its leaders and former government are demonized and completely rubbished such that they would find it difficult to appeal to Nigerians in future elections. This is a continuation of the kind of dubious propaganda on whose back the APC rode to power. But for how long can it continue to feed the anger of Nigerians with this confetti of misinformation and half-truths?

I am inclined to believe that every right-thinking Nigerian would support the move to get those who misappropriated the nation's fund to give account. But I do not think that members of the political class especially those who are in government and institutions who benefitted from the largesse from the ONSA would subscribe to that, knowing full well that it is now a mess that is spreading fast and staining the reputations of otherwise good people. It would be sad if innocuous apolitical gestures to some royal fathers for assisting to keep the peace in their domains, for instance, from the ONSA, are declassified in this on-going desperate bid by the APC government to dent the PDP administration under Jonathan.

True, the nation has been inundated with details of who got what from the ONSA and for what purposes. The way events are unfolding, more shocking details will still emerge in the course of the trial of Dasuki. But in the meantime, the initial details have shown how damaging a full declassification of the list of those who got cash and gifts from the ONSA could be. The saga has already become malodorous with report that Buhari himself got two bullet proof SUVs from the ONSA. There has been a mention of some amounts of money, to wit: $300,000 and another amount said to have been indirectly routed to him through an aide of his as published by some online newspaper.

Well, the simple lessons that can quickly be learnt from all of this are two: one, if you must come to equity, you must come with clean hands; two, if you live in a glass house, you should not throw stones. Indeed, Buhari has lost the moral high ground to probe Dasuki or to prosecute the anti-corruption war. He will proceed with the probe and war only if he is not sincere to himself. As it is, Nigerians and the world can no longer be deceived by his bogus anti-corruption crusade. It is a crusade bereft of sincerity, morality and character.

Seriously, was Buhari really committed from the beginning to this anti-corruption war? I do not think so, otherwise, he would have been concerned about the manner of his emergence as the presidential candidate of the APC, coming first in the heavily monetized primary that saw him beat Rabiu Kwankwaso and Atiku Abubakar to the second and third places respectively. Again, he should have been concerned about the sources of the multi-billion naira that went into his nationwide campaign and the election proper. Or is he trying to tell us that it was stones that he spent in the place of money? If we were to follow the trail and trace the money, to which state governments' coffers and other possible illicitly-gotten wealth will the trail take us?

Without further ado, I submit that there was nothing that Dasuki did with the security votes in the ONSA that APC governors did not do with their security votes at the sub-national level. I also submit that there was nothing that the PDP did that the APC did not do. It, therefore, amounts to sheer political vendetta on the part of the Buhari-led APC government to shout blue murder about the money that the PDP sent through some of its leaders to prosecute the last general election while feeling cool and politically correct, under presidential protection, with the humongous amount it spent on the same election.

It is unfair on the part of the governing party to create the impression that the money PDP spent came from a supposed $2.1 billion earmarked for arms procurement. It is possible that it could be a phantom fund. If, however, the disbursements came from the money, it is not in the place of those who received payments from the ONSA for some presidential assignments to know or to ask question from Dasuki at the time of the payments where the money was coming from or whether or not President Jonathan had approved the disbursements. It is only Dasuki who would know and when he appears in court, he will speak to the issue.