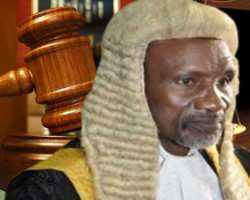 The Chief Justice of Nigeria, Justice Mahmud Mohammed, has expressed concerns over conflicting judgments emanating from the Court of Appeal.

The Peoples Democratic Party largely affected by the decisions of justices of the Court of Appeal in electoral matters had accused the justices of interpreting the laws to favour the ruling All Progressives Congress.

The party had also accused the justices of the Court of Appeal of giving conflicting judgments in similar cases and refusing to follow the precedents laid down by the Supreme Court.

In apparent allusion to these myriad of complaints, the CJN, at the annual conference held last week, said: “My Lords, it bears reminding that the overriding objective of every legal system in the world is to do justice. However, this cannot be achieved where there is confusion as to the state of the law as pronounced by the court.”

Click here for details
He told the justices that they were not allowed to continue to shift the goalposts when the game was on.

While advising them to adhere to certainty and stop creating confusion, Justice Mohammed said: “As your lordships will agree, where an aggrieved person perceives, whether rightly or wrongly, that they will not receive justice, such a situation can indeed bode ill for the community in which he lives and can lead to acrimony and anarchy.

“We must not ignore the negative perception that is occasioned by conflicting judgments delivered at various divisions of the Court of Appeal. Such judicial contradictions only result in untold hardships to litigants in their quest for justice. They further cast your lordships in an unfavourable light and leave the judiciary at the mercy of inuendos, crass publications and editorials.”

The CJN nevertheless commended the justices for the good work they were doing. He specifically commended the president of the court, Justice Zainab Bulkachuwa, for the way she constituted election petitions tribunals  in spite of budgetary constraints.

He said: “I must similarly commend your lordships for being instrumental in propelling the judiciary towards an improved system of administration of justice in Nigeria. With one justice of appeal to 1.8 million Nigerians, I daresay that your efforts at dispensing justice, despite frightening caseloads, can best be described as extraordinary.”

To put an end to a situation where a division of the Court of Appeal delivers a judgment that contradicts the one delivered by another division, the CJN advised the Court of Appeal to “have an internal law report for Justices to access either electronically or in print in order to reduce the avenue for conflict in its jurisprudence.”

He further commended to them the advice of a former justice of the Supreme Court, Niki Tobi, who suggested that, “immediately a decision is given in one division, it should be sent to the other division without delay.”

Although the retired justice gave the advice as far back as 2008, the Court of Appeal did not act on it.

Pending before the Supreme Court are appeals challenging the decisions of the Court of Appeal in Rivers, Akwa Ibom, Taraba and Benue States among others.

Speaking at the conference, the President of the Court, Justice Zainab Bulkachuwa, said 2015 was quite challenging because it was an election year.

She told the justices that because of the new policy of zero budgeting, the court would not embark on new projects but would strive to complete all existing ones.

Bulkachuwa said the annual justices conference was introduced by former President of the court, Justice Mustapha Akanbi, to enable the court take stock of its activities for the year, identify challenges and proffer solutions. -Thisday.