Davido's baby scandal– This is my story, by Dele Momodu 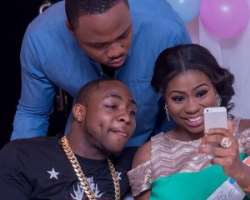 Dele Momodu on his Instagram page explains his role in Davido's baby saga.

In september 2015, I got a call from Dr. Adedeji Adeleke, a long time friend, telling me his son had fathered a baby girl with my cousin, Sophia Momodu. I rejoiced with him as any reasonable soul will do. He apologised that he had not called all along because he wasn't sure if Sophie's baby was going to turn out a fake one like that of two others who had turned up at his doorstep.

But mercifully, according to Dr. Adeleke, Sophie's baby passed the DNA test by over 98 per cent and he was elated. I congratulated him again as proud grandfather. He said he would like to meet me with Sophie since Sophie's dad, Uncle Jibola Momodu, passed on years ago and Sophie mentioned me as her cousin.

I had known about Sophie's baby through her first cousin Ruth Abraham and had called to congratulate her. I was happy when she sent me pictures of the baby and other romantic pictures with David Adeleke, aka Davido.

But I never contacted David's dad deliberately so as not to create the impression of begging for marriage. Where we come from, it is the man who approaches the lady's family to plead to be allowed to marry into the family.

Prior to this phone call from Dr. Adeleke, on the 11th July, 2015, Sophie had narrated to me how she was tricked to Coco Adeleke's house with her baby, Imade Aurora Adeleke. After getting to the house on Baderinwa Alabi Street, Lekki Phase I, Lagos, her baby was forcefully taken from her and she was thrown out of the premises with the threat that she would be decisively dealt with if she even bothered to return there.

There were armed policemen in the premises and to avoid what could have been a messy encounter, instinct prevailed on her to make her leave her breast suckling baby behind, with so much pain in her heart. By daybreak on the next day, Sophie was again at Coco Adeleke's house to take her baby, but she was prevented by armed policemen from gaining access into the house. She was again threatened and warned never to return for the child.

Despite the pain and trauma my cousin was made to undergo, I restrained myself from getting directly involved in the matter and appealed to her to stay calm and take it easy with the Adeleke's.

But after the phone call from Dr. Adeleke, precisely on September 10, 2015, I picked up Sophie and her mum and drove to Dr. Adeleke's home in Lekki, Lagos. All the while, I had waited patiently to meet Dr. Adeleke with questions probing for answers.

Dr. Adeleke invited two of his close friends to the meeting namely, His Majesty Oba Adedokun Abolarin and Mr. Wale Adeeyo. We went into lengthy discussions. His daughter Coco had brought in the little baby and both attended the meeting.

Dr. Adeleke explained why it took some time to call me and I said I understood. Dr. Adeleke said the baby was discovered to have traces of marijuana in her during medical test and said he believed Sophie and David were smokers and he needed to protect the child from two irresponsible parents, as he described them.

He told the gathering that the baby would be under temporary custody and observation. He directed that Sophie would come to his house every Sunday to see her baby. Our family agreed. He promised to pay Sophie a monthly upkeep. We thanked him for his kindness. He promised to buy her a car. We were grateful for his generosity.

Sophie said she got the monthly upkeep but never got the car and that she prefers to have her baby back and the Adelekes can keep their money.

I called Dr. Adeleke and he said I should allay her fears. I pleaded again for patience. I was shocked when Sophie called me desperately and said her daughter was being taken to Dubai by Coco. I immediately called Coco and she said she was taking the baby for intensive medicals and I wondered how she would pass through the airport without the consent of Sophie but she actually did and even sent me pictures from Dubai. I played it cool and encouraged Sophie to calm down.

Sophie became withdrawn and extremely saddened. The situation went from bad to worse. She and David became aggressive enemies. At a point, David sent messages to Sophie and using the 'f' word against me. His father was shocked and called him to apologise which he did and I accepted and even told him how much I love him.

The worst came when my wife came from London and went with Sophie to check on the baby at Coco's house and they literally walked them out of their house. My wife called and I called Dr. Adeleke who said they should go to his house and wait for him.

Their meeting did not go well because my wife asked when the baby would be returned to her mum and Dr. Adeleke went into the same old story of marijuana abuse and Sophie said she was ready for a test which Dr. Adeleke wasn't interested in. Dr. Adeleke explained why the car had not been bought and my wife told him the baby was the issue and not the car. Dr. Adeleke didn't like the sound of this but it was reaching a point that some truth needed to be told that a baby cannot be bought with money.

I flew to Nigeria on December 28 after Sophie told me the Adelekes were travelling to Dubai with her baby without her consent again. As soon as I landed, I called Uncle Wale Adeeyo, a close confidant of Dr. Adeleke, and expressed our displeasure at the way Sophie was being treated and he promised to speak to Dr. Adeleke. When he came back to me he didn't sound too positive. We spoke several times and nothing tangible came out of his supposed intervention.

I called Oba Dokun Abolarin but he was busy at a wedding in Ibadan. I then called Uncle Wale again and told him Sophie has plans to stop the trip on the knowledge that David has collected an American passport for the baby and the rumour that the baby was being abducted to America. I pleaded that we should avoid a confrontation.

I headed to the airport to alert the airport authorities including immigration and Emirates. As predicted, the Adelekes arrived the airport with the baby where Immigration had laid in wait for them. Coco came forward and was asked who the mother of the baby was and she claimed ownership and her passport and that of the baby were taken away by immigration.

Her dad was alerted and he came to the office of the Comptroller with others to try and rescue the passports but the Immigration stood their grounds. I saw him making frantic calls but he gave up after the flight departed. He repeated the same boast that no one could ever take the baby from him and I told him to stop talking like God. No one likes a fight but we've been treated shabbily and had to stop the charade. We could not be intimidated and everyone at the airport expressed shock and horror at such a brazen attempt to export a human being only seven month old without the mother.

We thank the officers who rescued us from a powerful family. We are always for peace, justice and equity. No one threatened the Adelekes with any expose unless they are using reversed psychology.

Personally, I'm not a junk writer and would never descend so low to abuse those permanently connected to us through an innocent baby. We love the baby like they do. Naij.com