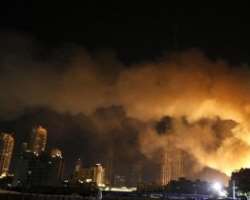 Grasping the edge of a balcony 48 stories from the ground, just metres away from a raging fire, the photographer thought he may not live to see 2016.

“One hour, then that’s it, I’m dead,” he thought as he stood on the tiny sill of a balcony in Dubai’s luxury The Address Downtown hotel, attached by a rope to a massive window-cleaning platform.

Not long before, he had entered the balcony with a friend to take photographs of the nearby New Year’s Eve fireworks display for his newspaper.

But the night suddenly changed when a huge fire erupted in the hotel below them, engulfing several floors of the huge building in the heart of the skyscraper city.

“There’s a fire,” his friend shouted, rushing towards the nearest exit, before the photographer looked out and saw “smoke coming towards the balcony”.

Afraid that he would die from suffocation, and unable to see how he could escape, the photographer decided there was only one thing for it: to tie a rope from himself to a window-cleaning platform and hang off the balcony. He rolled out some 30 metres (100 feet) of a heavy-duty cable from a nearby machine used by workers to clean the tower’s windows, attached it to his belt and photographing equipment and stepped off the edge.

The rope “was my saviour”, he told AFP, asking not to be named and explaining that the fire was less than 10 metres away from him at that point.

He feared he would die from suffocation, he said. “I wasn’t sure what was happening downstairs. I was afraid I might collapse from the smoke.”

Holding on for dear life outside the building, he began calling and texting his colleagues asking them to get in touch with the civil defence for help. Civil defence representatives kept him calm as he waited to be rescued. “I was telling them I hoped to survive and see my wife,” he said.

More than half an hour later, he heard rescue workers approaching his floor.

“When I saw lights and heard the sounds of footsteps at the floor I was in, I started tapping on the aluminium to get their attention,” he said.

“I think I was the only person left stuck that long,” he said, describing how he was led out through the smoke-filled corridors of the five-star hotel.

Dubai’s police chief said that all the residents had been evacuated due to the blaze, the cause of which was unknown.

Not far away, Dubai’s fireworks display erupted as usual to welcome in the new year, starting from the Burj Khalifa — the world’s tallest building — before spreading across the skies above the city.

For the photographer, the start of 2016 is something he will never forget. “I’m excited because it’s New Year, and (filled with) an adrenaline rush,” he told AFP, his voice still shaky.