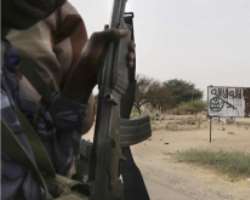 The recent declaration by President Buhari that the country has “technically won the war” against Boko Haram reminds one of George W Bush's 'Mission Accomplished' speech on May 1 2003.

The United States had invaded Iraq on March 20 2013, with a coalition that included American, Australian, Polish and Danish military troops. With the Iraqi capital Baghdad falling on April 20 2003 – much earlier than envisaged by the coalition – an elated President Bush could hardly contain himself. In a televised speech on May 1 2003, President Bush pompously announced the defeat of Saddam Hussein and a victory for the coalition. On the background during that speech was a banner that read “Mission Accomplished” displayed on the US warship/ aircraft carrier USS Abraham Lincoln (also known as Navy One), which had had just  returned from combat operations in the Persian Gulf.

As it turned out however that declaration was premature because most of the casualties in the conflict – both civilian and the military – occurred after that speech. For his army of critics, that speech was one more instance of President Bush's shallowness on how the real world works.  Bush himself was to severally regret that 'Mission Accomplished' speech. For instance in January 2009 he was quoted as saying: “Clearly putting 'Mission Accomplished' on an aircraft carrier was a mistake.”

Re-wind to Nigeria, December 2015.
Nobody doubts that President Buhari was very determined from the day he assumed office as the elected President to confront Boko Haram headlong. However when in September he gave the military a December deadline to defeat the terrorists, many felt that such a deadline could be counterproductive.   For instance in my column of October 7 2015 entitled 'Re-thinking Boko Haram', I argued that while giving the military a deadline to crush Boko Haram could have a role to play in motivating the soldiers and re-assuring the civilian populace, I was not sure whether a failure to meet the deadline could be interpreted as a defeat for the country or not. The deadline suggested a simplistic binary of 'win' or 'lose'.

The deadline also not only wrongly assumed that the Boko Haram militants were enemies massed on the other side of a conventional war but also ignored both the history of terrorism  and Boko Haram's specific history. The truth is that the current religion-inspired wave of terrorism (which was estimated to have started in 1979) has not really been completely routed in any clime. In fact scholars estimate that this wave may last until 2025 to be replaced by another wave. In other words, if history is a guide, then we can talk of defeating terrorism only in the sense that we talk of eliminating corruption and crime. Complete elimination of terrorism is utopia but reducing it to the barest minimum is possible and should be the goal. Let us remember that following the attack in the USA on September 1, 2001, President George W. Bush declared a war on terrorism with a boast that the war “would not end until every terrorist group of global reach has been found, stopped and defeated”. More than 14 years after, can we say America has won or is winning the war?

To argue as – as some APC spokes persons are currently doing – that the President never said or suggested that Boko Haram attacks would end by December but only that the group would no longer be able to hold any Nigerian territory – is to indulge in opulent sophistry. For one this line of logic not only wrongly assumes that Boko Haram was not lethal before it began seizing territories about two or three years ago but also falsely assumes that Sambisa forest (Boko Haram's current stronghold) is not part of Nigerian territory.

I feel it would have been far more ennobling for the government to come clean and admit that its initial assessment of the situation had been faulty. Essentially therefore, apart from putting the integrity of the government on the line, the government's 'Boko Haram has been technically defeated' speech could raise the expectation of the citizens such that any attack by the group will be seen as another evidence that the government has lied to them. In other words, the claim that Boko Haram has been 'technically defeated' could lead to frustrations and under- appreciation of the gallantry and sacrifices of the soldiers fighting the terrorists.

Some of Boko Haram's attacks since the 'Boko Haram has been technically defeated' speech include:  on Christmas day, just two days after Buhari’s pronouncement, Boko Haram raided a village, killing 14 people. On December 27, the Daily Post reported of an intense battle between Boko Haram insurgents and the military over attempts by the insurgents to take over Maiduguri, the capital city of Borno State. On the same December 27, the Premium Times reported that the army arrested seven Boko Haram bomb makers in Kaduna. On December 28 several media outlets reported that about 30 people were feared dead in a suicide attack in Adamawa state.

Since its radicalization in 2010, Boko Haram has shown remarkable resilience and adaptability. On at least three occasions, the country thought the group had become routed – only to be disappointed.

The 'smart' way to remove fuel subsidy
The recent announcement by the  Federal Government that effective   from January 1, 2016, Premium Motor Spirit (PMS), otherwise known as petrol or fuel, would be sold at N86 per litre by the Nigerian National Petroleum Corporation's (NNPC's) retail stations while other oil marketers would sell at N86.50 per litre, was a smart move by the government. The current official cost of fuel is N97 per litre – though the price is considerably more outside the major cities of Abuja and Lagos. The general belief is that the government has finally decided to remove fuel subsidy from January 2016 – despite its conflicting signals on the matter.

By hiding the bad news in good news – a perfectly legitimate strategy used by governments across the world – the government is probably hoping to tie the hands of those opposed to removing subsidies. By showing that the price of fuel should actually be lower despite the de-subsidization, the government probably hopes to remove the quivers from the arrows of the pro-subsidy lobby.

Though the Nigerian Labour Congress (NLC) said it would resist any subsidy removal, it is not certain that they will get the backing of most Nigerians on this. The fact is that several people who were opposed to removing subsidies have since shifted positions. In fact the 'shut down Nigeria' protests that followed the attempt by the Jonathan administration to substantially reduce the subsidy on fuel on January 1 2012 had led to the House of Representatives setting up the Farouk Lawan Ad Hoc Committee on Fuel subsidy which showed how the subsidy regime was turned into a haven for rent seeking and outright theft by a cabal of oil marketers. The government's own Aig-Imoukhuede-led committee report and the Nuhu Ribadu's oil subsidy report were no less damning of the oil marketers – who fought back ferociously in a manner that convinced many Nigerians that given how powerful they are, the only viable option to the scam was for the subsidy to go.

With long queues returning at petrol stations across the country, people were rather surprised that it took the Buhari government so long to act on the fuel subsidy matter. In this sense I do not share the sentiment that it would amount to hypocrisy for those who opposed the removal of fuel subsidy under former President Jonathan to now turn round to support it.

I have two concerns on this though: one, if the subsidy should go (as I believe it should), what then is the need for the government to impose price controls with threats against anyone who will sell above the recommended price? If the supply side is as it should be, then the price should be determined by demand and supply.

My other concern is that while we are doing away with one subsidy (fuel subsidy), we are introducing a couple of new ones – school feeding and N5, 000 per month to 'vulnerable' unemployed people. Just like the fuel subsidy, the possibility that a cabal of contractors would capture these new regimes is very high.