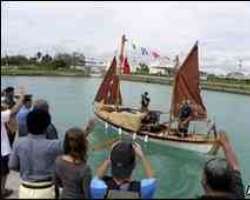 The four sailors will travel in a small, open-top boat

Four men have set sail in the South Pacific in their bid to recreate the epic 7,000 km (4,350 mile) voyage of Captain William Bligh.

Captain Bligh was cast adrift after the famous mutiny on the Bounty in 1789.

The crew is sailing in a 25ft (7.6m) open-deck boat with two small sails. They are hoping to sail from Tonga to West Timor in seven weeks.

The expedition has tried hard to recreate the conditions which confronted the Royal Navy captain.

Memorialised in two Hollywood films as well as novels and poems, the mutiny on the Bounty unfolded in 1789 when William Bligh was cast adrift in the South Pacific by his rebellious crew.

Accompanied by 18 men, Bligh managed to sail from near Tonga to West Timor in a voyage that lasted almost 50 days.

He survived by catching fish and drinking rain water.

From Tonga they will head west to Fiji, Vanuatu and Restoration Island before sailing north to Australia's Great Barrier Reef, then through the Torres Strait to West Timor.

To add to the authenticity of the voyage the adventurers are trying to get close to the provisions which Captain Bligh had on board – ship biscuits, pork, over 100 litres of water and six bottles of wine.

Like Bligh, they will not be using any modern-day navigational systems such as charts, compass or lights.

The main difference is that their boat is only about half the size of Bligh's vessel and their biggest fear is the danger of capsizing.