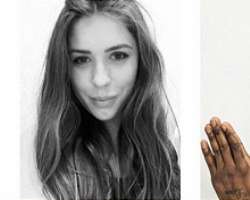 Super Eagles striker, Ideye Brown, is in the news and this time not for his goal scoring abilities but for the wrong reasons which is neglect of his fatherly duties to his alledged children with a foreign lady.

For some weeks now, a Ukranian woman named Alex, has been calling out on the player to come claim his responsibilities as a father to his two kids instead of pretending he only has an “official family.”
The Nigerian international footballer has a wife, Damka Ideye and has two sons with her.

The soccer star who, plays for Olympiakos football club in Greece, has been called out by a lady who claimed she bore two kids for him, a boy by name Joel and a girl by name Michelle.

Alex, who has been making serious efforts to ensure that the player accept the paternity of the kids recently questioned what happiness the player stands to derive in his career knowing full well that he has two kids he has denied knowing.