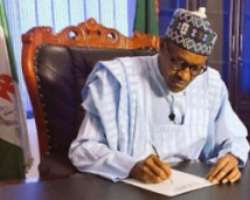 The President held his maiden Media Chat, which was televised nationwide by television networks. During the chart, the president addressed various issues of national importance, where he tried to clear some misconceptions. Excerpts of some of the topics he addressed are reproduced below.

Chibok girls
We insisted on the bona fide leaders of the Boko Haram to negotiate on the children. We want to be sure they (the girls) are complete. In Sambisa, no Chibok girls have been recovered. They must have been scattered. We are still leaving ourselves open. While they are still keeping the girls, they should not thinker with the fact that we would secure the rest of Nigerians…There is no firm intelligence on where those girls are or whether they are safe. There is no proof…We are looking for a credible Boko Haram leadership to assure us that the girls are alive.

Internally displaced persons
Over 70 percent of the internally displaced persons are women and children. Over 65 percent are children and many of them are orphaned. Some of them don’t even know where they are. That’s to show how pathetic the situation is. About N25 billion was realised to have for the IDPs. The week I was sworn-in, I went to Chad and Niger and I was impressed with the goodwill. They promised to help. The G7 and others have been there. What we recommend is that they should send people to access the damage and tell what they could do. The challenge is getting the orphans to know where they are from, get teachers for their schools and build their schools.

The IDP camp in Benin
The Benin camp is the (result of the) good intention from a charity. The governor of Edo State, Comrade Adams Oshiomhole, came with the Inspector-General of Police and what we said was that some of them should identify where they came from. Some of them were united with their parents while others preferred to stay in the church and their parents came and approved. The FG knows about it (the camp) and is doing something about it. Oshiomhole was kind enough to get schools and put them in schools within Benin city.

It happened in one state and interestingly, the President of Iran spoke with me and I told him that as a country we have a system of investigation. The governor of the state has visited the area. As the head of the FG, I have to wait for an official report. The Kaduna government will release report of their enquiry. Whether it is the police of the army, there is a standard of investigation. To be fair on all sides, we have to wait for the report of the enquiry. I expect a judicial enquiry by the Kaduna state government. It happened there and they have been there for 20 years. There are also some allegations but I will rather wait for the report.

Technical victory over Boko Haram
I said their capacity to conventionally attack institutions have been stopped, but their use of IEDs is a concern to the government. They get girls of 15 years, wrap them on with IEDs and kill innocent people. In motor parks or markets, we have people with detectors. If it continues, hijab would have to be banned.

Currency devaluation
Why would I want to support devaluation? When we came in 1984, people didn’t know how much debt Nigeria had accumulated for 3 and half years of civilian rule. As a minister in charge of Petroleum in Obasanjo’s government, I know how much we struggled to leave a good economy..but by the time the military came back, nobody knew how much Nigeria was owing. The reserves had disappeared. Now, we have debt. We made sure we introduced Treasury Single Account; in the military, we had over 75 accounts while NNPC alone had over 25 accounts (before the TSA). Now we have worked over N1.5 trillion into the Central Bank. The downturn in the petroleum industry is unfortunate for this government. Previous budgets had 90 percent for overhead. Which country could develop with such? We are in a very bad shape. I need to be convinced (about need for devaluation). If you devalue the naira, against what? Dollar,…we are importing including toothpick. We have 43 items from rice to toothpicks. We are on the receiving end…we need power so that people can afford to do their things. We need roads and railways. These are our priorities, not people looking to import rice. What I know is that TSA, for the naira that we imposed, has fetched us money.

Subsidy on petroleum products
When I was in government, we had over 400 barrels per day refined locally. We also exported refined products. Today, the infrastructure have been destroyed. Why can’t they even maintain what they inherited. How much is petroleum sold for now? The cost of petrol is so low that you don’t have to subsidise.

We hope our refineries would have started. I just told you they failed to maintain refineries, maintain the pipes. And then petroleum sold for over $100 dollars. What question did you ask them then?

Creation Of Job And Power. Why Did You Give Fashola Three Ministries?

When we came, we inherited 40 ministries, 42 permanent secretaries. Only God knows the number of directors. So we cut down the ministries and did other things. All these things took time. From our campaign, we said agriculture and solid minerals are some of the quickest ways to success. We have solid minerals in commercial amount. To cut down unemployment, we would look at the agriculture and solid minerals. Fashola is not our super minister…we will stop gas flaring, work on kainji, Egbin and others.

National Assembly’s N45b on cars
I turned down over N400 million proposal for car. But I said the one I met, I will use. I said everybody must support the TSA. I read that the National Assembly is spending N45 billion on cars. For the National Assembly, I think we would have a close-door session. The money is not there. So let’s get power and see how far we can go if the power works. Then let’s look at roads. The third is security. We hope we do our best in terms of getting revenue to run the government. We chose to spend about 30 percent of the budget on infrastructure…If I can reject the N400 million, I can’t see the National Assembly spending over N45 billion for cars on top of the transport allowance they collect. We are very stretched economically.

Corrupt judges
It takes two to tangle. There are allegations of corruption in judiciary. I think it is something government has to take with the judiciary itself. Those who say the judiciary is corrupt have to prove it. Somebody must have offered the bribe.

N18,000 Minimum Wage
When we came in, 27 of the 36 states could not pay salaries. The FG had to sit with the CBN to give them money to go and pay salaries. That is the highest we can do. For the FG, we will not touch that (minimum wage), but the states want to be on their own.