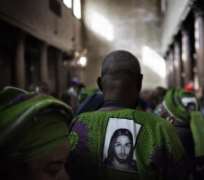 A Nigerian businessman is set to unveil what he says is Africa’s largest statue of Jesus, describing it as a symbol of peace in a country wracked by Islamist insurgency.

Obinna Onuoha commissioned the 8.53 metre (28 foot) tall “Jesus de Greatest” statue in 2013, hiring a Chinese company to carve it out of white marble.

Standing barefoot with arms outstretched, the 40 ton statue will tower over St. Aloysius Catholic Church in the mainly Christian village of Abajah in Nigeria’s southeastern state of Imo.

“It’s going to be the biggest statue of Jesus on the continent,” said Onuoha, the 43-year-old chief executive officer of an oil and gas distribution company.

“Definitely pilgrims will come.”
Around 1,000 people are expected to attend the statue’s unveiling on New Year’s Day.

Onuoha said he has contacted the police just to be sure that it is not attacked or vandalised.

Nigeria, Africa’s largest country with 170 million people, is split between a more prosperous Christian south and a poor Muslim north — an uneasy balance that is sometimes a source of tension.

More than 17,000 people have been killed in Islamist group Boko Haram’s six-year quest to create an independent state but the violence has been mainly confined to Nigeria’s Muslim-majority north.

“We think religions can exist side by side,” Onuoha said. “We hope that people can live in harmony.”

Onuoha says he had a dream in 1997 to build a giant statue of Jesus.

When his 68-year-old mother fell seriously ill a few years ago, she made him promise that he would build a church if she survived.

He built it in Abajah, some 500 kilometres southeast of Lagos, and it is here that the “Jesus de Greatest” statue is located.

Reactions to the statue are mixed.
“It is clearly wrong,” Emmanuel Lashiolola, a Catholic and former student in a seminary school, said.

“You do not unveil Jesus Christ. I hope somebody is not trying to use the ceremony to raise money.”

But priest Paul Awowole said: “Liturgically, I do not think there is anything is wrong in unveiling the statue of Jesus Christ. It is to venerate and honour Jesus Christ.”

Onuoha is just counting down the days until the statue makes its official public debut.

“The scaffolding is coming off as we speak,” Onuoha said. “People driving by are already stopping to have a look.”