Romancing With Evil: A Brotherly Advice To The Speaker Of The Akwa Ibom State House Of Assembly 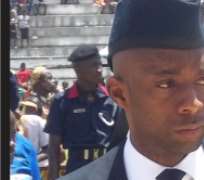 Dear Rt. Hon. Onofiok Luke,
Without prejudice to possible legal challenge to your election as the Speaker of the Akwa Ibom State House of Assembly having regard to the composition of the House as at Monday the 21st December,  2015 when you were elected which felt short of the minimum number of 24 members enshrined in Section 91 of the Constitution of the Federal Republic of Nigeria 1999 (as amended) sequel to the nullification of election of four members which reduced the total membership of the House from 26 to 22, I congratulate you on your emergence.

My dear brother, your election as the Speaker confirms that you are a child of destiny. But the destiny of Onofiok Luke is not and will NEVER be the destiny of Akwa Ibom State. This is the basis for this unsolicited but nevertheless expedient brotherly advice.

I titled this piece a ‘brotherly advice’ chiefly for two reasons. Firstly, I see you as a brother not because we are from the same State but because you have an antecedent of activism and an affiliation with the struggle for a better society (though your political ascendancy has greatly diminished the nobility of your struggle for an egalitarian society.). Secondly, I needed to extricate this piece from officialdom usually associated with open letters.

Sir, while still basking in the euphoria of your election, self censorship is highly recommended. It is necessary for you to urgently interrogate yourself before it is too late. You would have noticed that the goodwill that accompanied your election as the Speaker of the Akwa Ibom State House of Assembly was not delineated by disparity in political affiliations. Indeed, you received avalanche of tributes and congratulatory messages across the political spectrum. This should make you circumspect. Have you bothered to ask why people who do not want to be associated with anything that has to do with the Peoples Democratic Party (PDP) shoved aside their dogmatism and embraced your emergence despite your membership of the PDP?

It will be ludicrous to construe this goodwill as an endorsement of anything or anyone that you associate with. It will be not only foolish but a costly mistake to think that most people that love Onofiok Luke also love his political associates. Even in a family setting, people do love the husband and despise the wife and vice versa. Although you have a certain degree of followership especially among the youths, it does not represent the collective will of Akwa Ibom youths. The people that are willing to sink and enter the fire with you are only but a little fraction of Akwa Ibom people.

My brother, left for Mr Udom Emmanuel, Sen Godswill Akpabio, Unoma Akpabio and all the Akpabios of this world you would not have been the Speaker of the Akwa Ibom State House of Assembly today. We all know the deep seated hatred that the Akpabios’ have for you. We have not forgotten how you were physically manhandled at a funeral service on November 2, 2013 in Etim Ekpo Local Government Area. Neither have we forgotten how Unoma Akpabio personally led policemen to the venue of the PDP primary election for your constituency just to truncate your return to the House. Udom Emmanuel NEVER supported your speakership aspiration, he bowed to the evil dictates of those that rigged him into office and criminally imposed him on the people of Akwa Ibom State to whom he owes unalloyed loyalty.

If someone had said that the election of the sacked and erstwhile Speaker Mr Aniekan Uko will be nullified by the Court of Appeal to pave the way for your ascendancy to the speakership position no one would have believed. It came as a surprise because no one expected it. This means that there is a God that rules over the affairs of men. While Udom Emmanuel and the Akpabios’ of this world thought that it was over for you the unexpected happened. Today you are the Speaker and GodswillAkpabio, Unoma Akpabio and all the Akpabios have been shamed.

My dear brother, insinuations are rife that the power brokers within the PDP in Akwa Ibom State settled for you because they believed that you can improve their electoral fortunes during the upcoming governorship election subject to the final decision of the Supreme Court. It is widely rumoured that you have been mandated to use your good offices to “work for” Udom Emmanuel since you will be the acting governor during the election period. Some have even boasted that your election as the Speaker and subsequent assumption of the position of acting governor will mark a dead kernel  for the gubernatorial aspiration of Mr Umana Okon Umana, the governorship candidate of the All Progressives Congress (APC) in Akwa Ibom State. So many things has been said but very little sense has been made.

Those who think you have the magic wane to resurrect a dead culture of imposition forget that you are an ordinary human being. They are lost on the fact that Onofiok Luke is not God but a human being that eats, farts and defecates like every other mortal.

My brother, you will be making the most costly mistake of your political career if you ever contemplate fighting the aspiration of Umana Okon Umana. The forces that are backing Umana Umana are far beyond you. This is not mere assertion. Who would have believed that someone can go to court in Nigeria and have an election that was manipulated by Godswill Akpabio nullified? That Umana Okon Umana has defeated Akpabio in court is a clear testament that divine forces are interested in the aspiration of Umana Umana. Do not let the devil to mislead you into embarking on a suicidal political voyage. You cannot determine the outcome of the upcoming governorship. I repeat, it is beyond you.

In any case, you are the last person that should stand on the way of Umana Okon Umana. Akwa Ibom people are not unaware of the personal and direct contributions of Umana Umana to your academic pursuit, political career and family. He was there for you when the likes of Udom Emmanuel did not know that there are people in the State in need of help and assistance. The same Unoma Akpabio that fought tirelessly to frustrate your re-election to the House “discovered” Udom Emmanuel according to an open confessional statement made by Godswill Akpabio. Will you now bow to the undemocratic seed planted by Unoma Akpabio in Akwa Ibom State?

Least they forget, the same Umana Okon Umana that they want you to fight dirty with today is the same Umana Okon Umana that signed your nomination papers for election into the House of Assembly. The photo of that event is currently trending on the social media. The world is waiting to see whether Onofiok Luke will pay back the very man that gave him shoulders to stand on at a critical point of his political career with evil.

Umana Okon Umana is not a saint, but you will agree with me that unlike Udom Emmanuel, Umana have feelings for the plight of people. He cares about the downtrodden and appreciates loyalty and excellence. He is not like Udom Emmanuel who snubs people because of status. I have encountered indigent people who have benefited from his scholarship scheme which has been on for years now. He is not opportunistic like Udom Emmanuel who thinks that sharing bags of rice to and crediting GSM phones of Akwa Ibom residents with N200 airtime because of the upcoming election will endear him to the electorate.

Why do you think some of us have taken a non negotiable stand on the governorship of Akwa Ibom State? It is because we want an Akwa Ibom that belongs to all; an Akwa Ibom where the wishes of the majority are respected. We cannot tolerate a situation where Godswill Akpabio will sit with his wife and family members and handpick a governor, deputy governor, National Assembly members from the State, speaker and members of the House of Assembly and other office holders. This is slavery. An Onofiok Luke should be part of the ongoing struggle to free our State from the clutches of a vicious and corrupt dynasty.

I am aware of your ongoing efforts to lure people who are part of the Free Akwa Ibom campaign to your side. You have been making frantic efforts to entice oppositional forces to renege on their noble path and join in the feast of shame exemplified by Udom Emmanuel. You think that by calling and meeting with people who are critical of the slave carnival going on in Akwa Ibom State that you will win the confidence of those who think they own the State? How many dissenting voices can you silence with pecuniary inducements and hypocritical fraternity? How many journalists and social media influencers can you seduce with filthy lucre? Instead of concentrating on your legislative functions you are roaming about looking for people to buy over. Why are you disgracing yourself in this manner? It is a sad commentary that the widely respected Onofiok Luke is now touting for followership. Whoever is doing this to you will never go unpunished.

What do you think Godswill Akpabio and his cabal can do for you? Have they promised to “make you” a governor in the future if you support Udom Emmanuel to succeed in the upcoming governorship election? The Onofiok Luke that I know is too intelligent to be deceived by such falsehood. Nobody knows where Akpabio will be by or before the governorship elections of 2019 or 2023. By then, Akpabio may be in jail, he may even be in hell or in heaven or any other place depending on the plan of God for him. Your future is not in the hand of the Akpabios’ therefore you have no reason to worship them. I expected that you will learn lessons from your recent political travails but it seems history means nothing to you. I challenge you to prove me wrong.

Remember your lovely children. You have a duty as a father to build an Akwa Ibom where they can aspire in the future for political offices without having to bow and kiss the dirty feet of any corrupt godfather. In the Akwa Ibom of today, one man, his family and cabal believe strongly that no one can assume any position of relevance without his/their consent. May your children not grow up to learn that their father resisted the wind of change that blew away the culture of impunity and godfatherism in their State.

Change is coming to Akwa Ibom State in 2016 and no Speaker who will become the Acting Governor can stop it. You can either romance with evil or join the  democratic forces to liberate our State, the choice is yours.