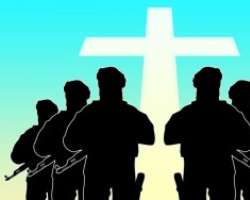 The radicalization of Jews and Muslims is squeezing Christians out of the Holy Land—and ISIS's reported arrival in the biblical city is just the latest sign.

NAZARETH, Israel — At the Basilica of the Annunciation in Nazareth, on the site where it is believed the Angel Gabriel told the Virgin Mary she would carry the next messiah, Jesus Christ, both Christian and Muslim residents of the city are reflecting on recent news that the so-called Islamic State has come into their midst.

This month, the Shin Bet, Israel's domestic intelligence agency, announced the arrest of five Nazareth residents who, it said, had declared their allegiance to ISIS. They had been training with arms, meeting covertly, and preparing for a jihad on “infidels,” the agency said.

Over the past few years, 40 Arab Israelis, often from marginalized communities, reportedly have crossed the border in order to join the fight in Syria and Iraq.In the city revered as the hometown of Jesus, where the young messiah was believed to have spent his childhood roaming the hills around what was then a bucolic Galilean village, current regional and domestic turmoil has modern-day Christian residents facing existential questions. They, after all, might well have been the “infidels” the ISIS recruits

wanted to kill.
So the holidays this year were somber and tense, as the Christian community deliberated about its place in a country that has seen extremism rise among both their Muslim and Jewish neighbors, as both have become increasingly vocal in their protests against Christians in the Holy Land.

Inevitably, some Nazareth residents suspect a conspiracy to disrupt the Arab community. “Israel has created ISIS here in order to divide and conquer,” argued Jalal Dari, a Muslim resident of Nazareth originally from the West Bank city of Ramallah. Since jumping the West Bank-Israel barrier almost 20 years ago in order to work construction jobs in Israel, Dari has settled here and raised a family. But even as he talked of nefarious plots, he recognized that with the influx of economic migrants like himself from out of town, the city is witnessing the growth of a new generation that is socially fragmented and vulnerable to radicalization through the Internet. “This is not Islam,” he said. “Islam does not allow killing.”

Amal Abidallah, a Nazareth native visiting the church, interrupted Dari. “But why do they target the Christians?” she demanded. “What you're saying is true in terms of Islam, but that's not what we're seeing.”

“There are those who recognize the weakness, the economic difficulties here, and exploit Islam in order to corrupt the youth,” said Sheikh Abu Anas, the imam of the local mosque. Outside his prayer beads shop, he shows off newspaper cutout photos of Islamic leaders who, he says, “speak the truth.” Among them is the firebrand Sheikh Raed Saleh, the leader of the now outlawed Northern Branch of the Islamic Movement, which does not recognize the state of Israel, as well as the toppled Egyptian President Mohammed Morsi and Turkish President Recep Tayyip Erdogan—all of whom built their power base through Islamic social service charities catering to vulnerable communities.

Some Christians have said Muslims in the area are attempting to instill cultural dominance, and in response a modest but growing number are beginning to publicly express their loyalty to the state of Israel, which they say can protect them from Islamic radicalism and other threats.

“We thank God for this safe haven and for being part of this miracle. Israel was created so that it can flourish,” wrote Father Gabriel Nadaf, a Greek Orthodox priest from a village outside Nazareth, on his Facebook page in a pre-Christmas message. “Israel is the only place in the Middle East where Christians are not persecuted and their population has increased, rather than decreased as in all other Islamic nations.”

Nadaf added that since the Palestinian Authority took control of Bethlehem in 1995, the Christian community has “kept quiet about the change that was sweeping the birthplace of Jesus,” but today its numbers have decreased by 64 percent.

“I'm in love with Israel, it is our only country, our only home.”

Israel recognizes Christianity as one of its official religions. Its Christians make up a small minority at 160,000, or 2 percent of the total population of Israel, and just over 10 percent of the 1.5 million Israeli-Arab population.

Historically, Christian denominations have differed in their stance vis-à-vis Israel, said Shadi Khalloul, a Maronite Catholic from a village north of Nazareth, but that is starting to change as the region becomes more hostile toward its Christian brethren.

“The other denominations were scared, because they were mostly in the West Bank, with the Muslim population, facing sometimes threats and fear of them revolting, persecuting them or massacring them, like what is happening in Syria or Iraq,” said Khalloul, who was one of the first Christians to serve voluntarily in the Israeli army and today runs the Christian Israeli Recruitment Forum to meet what he says is a growing desire among Christians in Israel to contribute to and integrate into the country.

(In Lebanon, Maronites had a strategic alliance with Israel during the 1975-90 civil war. One of its darkest chapters was the massacre of Palestinian civilians at the Sabra and Chatila refugee camps in 1982. The history of struggles for survival is long, and often ugly, in these parts.)

While Christian Arabs, like all of Israel's minorities, are exempt from serving in the army, Arin Shaabi, a 30-year-old resident of Nazareth, is one of more than 100 Christians who have served this year in the Israeli Defense Forces. “I'm in love with Israel, it is our only country, our only home,” said Shaabi, taking a break from pre-holiday preparations and shopping, just days after being released from her position in the army.

Christians in the army like Shaabi are still a minority, but the Israeli Defense Ministry is continuously hosting events to encourage more recruits and has reported that 200 additional Christians are planning to enlist in the coming year.

The thought of joining the army and serving the country “has always existed in the community, but now there is a real change,” said Shaabi, “especially among young people who have the courage to get up and enlist in the army and contribute to the country, especially as we understand that we have no other home and we feel the safest here.”

She echoed the pragmatism of many in the new generation of Arab Israelis, who see their top concerns as economic stability and obtaining civil rights, rather than achieving statehood.

And while Israel has historically protected Nazareth and Christian communities within the Green Line as a means of currying favor with Christian-majority Western countries and whitewashing its exclusionary policies, the ruling coalition has also included an unprecedented number of far-right politicians who advocate for Israel's Jewish, rather than democratic, character.

As the mainstream has moved right, consequently, the government has adopted a policy of virtual impunity for Jewish anti-Arab groups such as “Lehava,” originally founded to “save” Jewish girls from being seduced by Arab men, and whose mostly teenage members have become more aggressive in their opposition to the Christian presence in the country.

In an op-ed in the religious right-wing Kooker online news site, Lehava's leader, Bentzi Gopstein, called Christians “blood-sucking vampires” who were plotting to convert Jews. They should be expelled from the country, she wrote.

Extremist Jewish Israelis affiliated with the group have torched schools, churches, and Palestinian-owned properties in Israel and in the West Bank. Last summer, they firebombed the Church of the Multiplication of the Fish and Loaves, on the shores of the Sea of Galilee, where the New Testament says Jesus performed a miracle by feeding thousands with five loaves of bread and two fish. On its walls they scrawled, “False idols will be destroyed!”

International tourism nationwide is down at least 30 percent, according to the Israeli Tourism Ministry, and Israelis are afraid of entering Arab towns, she said. Last year, the guesthouse was fully booked, but now Nasser expected only a handful of tourists, most of whom were coming for just one night, on Christmas Eve.

“I'm very proud that we are living here and that this is our home,” she said, “but I hope that my children will go to live abroad so that they can experience humanity, of themselves and of others, rather than see people only by their religion, or any other classification.”

“We always feel that our future is not safe, and unlike many of the Jews—they have two passports—we only have one passport,” she said. Unlike in the past, she said, Israel is increasingly looking at “Jewishness as a nationality… and so we're really stuck between a hammer and an anvil, because to Israelis we are seen as the Arabs, and to the Arabs we are seen as the Israelis.”

And to ISIS, which now appears to be growing in their midst, they are marked for death.