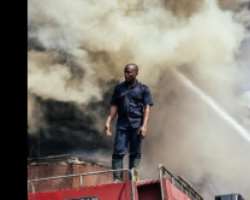 BEVERLY HILLS, December 29, (THEWILL) – Galaxy Television, Lagos, was Tuesday gutted by fire. This came amid disclosures that Lagos, Nigeria's commercial city, has so far recorded 260 fire disasters between December 1 and 28, 2015.

The number of fire disasters recorded in the month of December increased the total number of inferno between January and December 28, 2015 to 1,898 with 80 deaths recorded. The records show that the outgoing year recorded 200 fire incidents over that that of 2014.

The Galaxy TV office was gutted at about 5:30am due to an electrical spark from the armour cable connecting the studio to their mast.

Confirming the inferno, the director of the State Fire Service, Rasak Fadipe, said the distress call for the inferno was received at about 5:59am and water tankers were deployed to the scene immediately to combat the fire.

On how the fire was put out, the director said: “What we did when we arrived was to disconnect the electricity. And, we were able to put out the fire.”

Fadipe blamed the increasing cases of fire incidents in the state on inability of residents to reach out to the fire service in good time, saying, “whenever a fire occurs, residents do not call for help immediately. Rather, they fight the fire alone. It is until it has escalated that they call the emergency lines for help.”