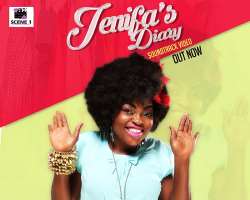 Award winning hilarious and captivating sit-com on TV, Jenifa’s Diary, has shown that it has more than enough staying power to enthrall, entertain and satisfy audiences over the years.

The hilarious but topical TV series which stars Funke Akindele as the lead actress has not only returned to location to shoot its fourth season, it is richer with its trade-mark unadulterated humour.

‘Jenifa’s Diary,’ a spin-off of the highly-successful movie, ‘Jenifa,’ is also set to release it's music video that combines the music and visuals glaringly that they compliment each other and creates fun.

The song is produced by Fliptyce, with vocals by Funke Akindele Music and K-lite. While the director of the music video is JJC Skillz and Director Q, both seamlessly infused aesthetic and style.

Jenifa’s Diary is about a wannabe village girl who finds herself in a university campus, and is determined to feel-among. She is determined, relentless, creative, and rugged. Her different experiences in the ‘big city’ also offer various lessons which viewers can definitely learn from.