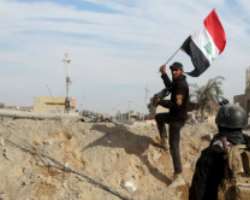 Iraq’s military flew the Iraqi flag above the main government complex in the city of Ramadi, a military spokesman said on Monday, the day after the army declared the provincial capital captured in its first major victory over Islamic State fighters.

“Yes, the city of Ramadi has been liberated. The Iraqi counter terrorism forces have raised the Iraqi flag over the government complex,” joint operations spokesman Brigadier General Yahya Rasool said in a statement broadcast on state television.

Victory in Ramadi, which was seized by Islamic State fighters in May, is the most significant triumph for Iraq’s U.S.-trained army since it collapsed in the face of an assault by the hardline Sunni Muslim militants 18 months ago.

Soldiers were shown on state television publicly slaughtering a sheep in an act of celebration.

Gunshots and an explosion could be heard as a state TV reporter interviewed other soldiers celebrating the victory with their automatic weapons held in the air, minutes after the military announcement. A separate plume of smoke could be seen nearby.

U.S. Army Colonel Steve Warren, a spokesman for the U.S.-led coalition backing Iraqi forces, said: “The clearance of the government center is a significant accomplishment and is the result of many months of hard work”.

He said the coalition had provided more than 630 airstrikes in the area over the past six months as well as training, advice and equipment to the army, counter-terrorism forces and police.

The U.S.-led coalition, which includes major European and Arab powers, has been waging an air campaign against Islamic State positions in both Iraq and Syria since mid-2014, when the fighters seized a third of Iraq’s territory.

The Iraqi army was humiliated in that advance, abandoning city after city and leaving fleets of American armored vehicles and other weapons in the militants’ hands.

One of the main challenges of the conflict since then has been rebuilding the Iraqi army into a force that can again capture and hold territory.

Baghdad has long said it would prove its forces’ rebuilt capability by rolling back militant advances in Anbar, the mainly Sunni province encompassing the fertile Euphrates River valley from Baghdad’s outskirts to the Syrian border.

After encircling Ramadi for weeks, Iraqi forces launched an assault to retake it last week and made a final push to seize the central administration complex on Sunday. Their progress had been slowed by explosives planted in streets and booby-trapped buildings.

Security officials said the forces still need to clear some pockets of insurgents in the city and its outskirts.

KEEPING CONTROL
Authorities gave no immediate death toll from the battle for the city. They have said most residents were evacuated before the assault.

Finance Minister Hoshiyar Zebari told Reuters the capture of Ramadi was “a done deal” but said the government had to do more to rebuild the city and encourage displaced people to return.

“The most important thing is to secure it (Ramadi) because Daesh can bounce back,” he said in an interview in Baghdad.

Should Ramadi stay under government control, it would be the first major city seized from Islamic State by Iraq’s military, which in past battles against the militants had operated mainly in a supporting role alongside powerful Iranian-backed Shi’ite militias.

The militias were held back from the battlefield in Ramadi this time to avoid antagonizing the mainly Sunni population. Washington had also expressed reluctance about being seen as fighting alongside the Iranian-backed groups.

Islamic State, also known by the acronyms ISIS, ISIL or Daesh, swept through a third of Iraq in June 2014 and declared a “caliphate” to rule over all Muslims from territory in both Iraq and Syria, carrying out mass killings and imposing a draconian form of Islam.

Since then, the battle against the group in both countries has drawn in most global and regional powers, often with competing allies on the ground in complex multi-sided civil wars.

The Baghdad government says the next target after Ramadi is the northern city of Mosul, by far the largest population center controlled by Islamic State in either Iraq or Syria. Washington had hoped that potentially decisive battle would take place in 2015 but it was pushed back after the fighters seized Ramadi.

The government, led by a Shi’ite Prime Minister, Haider al-Abadi, has said Ramadi would be handed over to local police and a Sunni tribal force once it was secured, a measure aimed at winning over the community to resist Islamic State.

Such a strategy would echo the U.S. military’s “surge” campaign of 2006-2007, which relied on recruiting and arming Sunni tribal fighter against a precursor of Islamic State. Anbar, including Ramadi, were major focuses of that campaign at the height of the 2003-2011 U.S. war in Iraq.