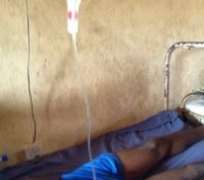 (Intersociety Nigeria, 28th December 2015)- Carefully planned war-like events going on at the Onitsha Niger Bridgehead have clearly revealed that the Hausa-Fulani segment of the Nigerian Army have declared a Second Civil War against the Igbo Ethnic Nationality of Nigeria and their South-south counterparts; particularly millions of Xmas returnees. Their sacred rights to ancestral homeland and ethnic identity are under intense threat. It is historically unheard of that a people of innocent background and character, returning to their ancestral homes for special seasonal feast like Xmas; are blocked and made to suffer and suffocate few miles to their ancestral homes. In the instant case, new born children and their nursing mothers as well as elderly people and children, etc are made to undergo excruciating pains and hardships with many sleeping inside their vehicles and by bush sides. Perishable food and domestic items worth millions of naira are also lost.

As if these were not enough, the Hausa-Fulani soldiers of the same 302 Regiment had since Wednesday, 23rd December 2015, blocked the Onitsha Niger Bridgehead and deliberately subjected the Igbo and South-south Xmas returnees to excruciating pains and hardships under the guise of checking and spotting members of IPOB and MASSOB; to the extent that livestock and perishable food items worth millions of naira were lost. On Thursday, 24th December 2015, our field team that visited the Bridgehead to see the sore goings on; spoke to some owners of the livestock and perished food items off the Bridge and at their offloading joints along Atani Road in Ogbaru LGA, over 200 dead chickens and baskets of rotten food items were counted; all lost to suffocation following excruciating traffic jams created by the Hausa-Fulani soldiers.

In another field trip yesterday, 27th December 2015, at the Niger Bridgehead led by our Board Chairman, which took place between 2.32pam and 4.05pm, the Onitsha end of the Bridgehead was deliberately and completely blocked by the Hausa-Fulani soldiers, obviously acting under firm directives of the duo of Col Issah Abdullahi, Commander of the Onitsha Army Regiment and the GOC of 82nd Division of the Nigerian Army, Brig Gen Ibrahim Attahiru. The trip also included a visit to hospitals where some victims of the Onitsha Niger Bridgehead Army shooting were receiving treatments.

The same soldiers’ blockage was the case at the Asaba end of the same Bridge. Yet, major reason given by the Nigerian Army and the Nigeria Police Force for embarking on the shooting and killing spree at the same Niger Bridge on 2nd and 17thDecember 2015, against pro Biafran peaceful protesters was falsely laid on “blockage of the important Bridge linking Southeast and South-south with the rest of Nigeria.” The carefully planned Second Civil War at the Niger Bridgehead totally marks itself out with other military checkpoints across the country where all forms of deliberate traffic jams are totally eliminated. To crown it all, most, if not all the soldiers stationed at the Onitsha Niger Bridgehead are soldiers of Hausa-Fulani extraction, who are imbued with chronic hatred of the Igbo Ethnic Nationality. Their positioning at the Niger Bridgehead is further accompanied with compound hatred (hate directive from their commanders and tribal hatred).

This explains our firm position that Second Civil War is ongoing at the Onitsha Niger Bridgehead. We wish to draw the attention of the international community concerning the ongoing persecution of the Igbo Ethnic Nationality by the Buhari administration in Nigeria; using carefully selected hate or xenophobia elements within the Nigerian Army. It also appears that Governor Willie Obiano as the Chief Security Officer of Anambra State is overpowered by orders from above; rendering him gubernatorially castrated and forcing him into unceremonious relocation to his Aguleri Home; from where he washes helplessly his own people being tormented and threatened and punished for belonging to Igbo Ethnic Nationality of Nigeria and for daring to visit their sacred homes this Xmas season. No sensible, capable and competent Governor folds his hands and watches his people returning for seasonally important feast like Xmas; being made to sleep by bush sides or inside their vehicles for many hours, if not whole day; few miles to their ancestral homes. This is the greatest threat against their rights to ethnic identity, existence and social development and cohabitation; enshrined and recognized in the 1999 Constitution and the African Charter on Human & Peoples Rights of 1981 (domesticated by Nigeria in 1983).

We enjoin all lovers of democracy in Nigeria and all over the world to call on the Government of Muhammadu Buhari to, as a matter of uttermost immediacy, pull its Hausa-Fulani dominated soldiers out of the Onitsha Niger Bridgehead. The Bridge must also be decongested so as to allow for free flow of traffic for innocent citizens of Southeast and South-south zones making their Xmas trips. No Ethnic Nationality, no matter how small or perceived weak; will tolerate being chased into its ancestral homes, killed, tortured or enslaved with impunity.

The Government of Muhammadu Buhari is dangerously pushing the Igbo Ethnic Nationality to the wall. Yesterday, it was open and unprovoked mass shooting and killing of their innocent sons and daughters for exercising non violently and peacefully their constitutional and treaties’ rights; and today, their sons and daughters returning home from across the world are again being threatened, questioned and punished for belonging to their generational ancestries.

When John De Baptism was shouting in the wilderness and the land of the living about the coming and birth of Jesus Christ, he was thought to be a fool and messenger of falsehood; yet, from AD 01 till date, his prophecy had long come to pass. We have spoken!

Onitsha Army Shooting & Hospital Raid Update: On 2nd December 2015, 14 critically wounded citizens were admitted at the Multicare Hospital; out of which, four with deep bullet wounds in their terminal body parts died. One had been retrieved by his family and buried and three others still in mortuary. Three are presently receiving treatment, while seven others have either been discharged or withdrawn by their families and moved to other medical locations.

On 17th December 2015, 13 critically wounded citizens were admitted at the same Hospital, after which soldiers of the Onitsha 302 Regiment stormed the Hospital at 10:08pm and arrested all of them (13) including four others (non injured). They were taken to the Army health centre and made to lie on the floor including five of them at the point of death who were returned to the Hospital after two hours or at about 1:10am. Twelve others including the injured were held hostage by the Onitsha Army 302 Regiment Commander, Col Issah Abdullahi, without treatment for two days; from where they were bundled to the State Criminal Investigation Department (SCID) of the Nigeria Police Force at Awka in the evening of Saturday 19th December 2015.

Bodies of eight innocent citizens killed by soldiers in the 17th December unprovoked and unwarranted shooting are yet to be accounted for or traced till date. Some of those with untreated gunshot wounds held hostage by the named Army Commander were returned to the Multicare Hospital from the State CID. Presently, four victims of the 17th December 2015 Army killing are still in the Hospital receiving treatments, while others have left the Hospital discharged or moved to other medical locations.

Out of those bundled to the State CID, three citizens are yet to be released while others have been granted bail or released. In all, seven critically injured citizens of the 2nd and 17th December 2015 Army shootings are still at the Multicare Hospital receiving treatment. From what we gathered in the Hospital, inadequate funds have remained a challenge hindering adequate medical treatment for the victims. That is to say that financial assistance from public spirited citizens is urgently needed to advance treatment and offset the hospital bills of all the Army gunshot victims admitted and treated by the Multicare Hospital.

We sincerely thank the Director of the Hospital, Dr. Ilochi Stephen for his courage, humility and humanitarianism. The role of the news crew of the Galaxy Television, Southeast Bureau also gladdens our heart. It is shocking to note that till date, other than the Galaxy TV, no other paper or electronic media crew had visited the Hospital to see things for themselves or hear from the horse’s mouth.

Attached pictures are those of five of the critically injured citizens of the 17th and 2nd December 2015 Onitsha Army shootings receiving treatment at the Multicare Hospital during our team and the Galaxy TV’s joint visit to the Hospital yesterday, 27th December 2015; as well as the interview session with the Galaxy TV’s news crew involving Intersociety Boss, Emeka Umeagbalasi and Anambra CLO’s Legal Secretary, Justus Uche Ijeoma, Esq. The Director of the Hospital also spoke corroboratively, but off camera.