I did not hold any political meeting against Buhari in Dubai: Atiku Abubakar 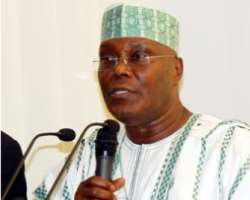 Former Vice President and chieftain of All Progressives Congress (APC) Atiku Abubakar has  denied hosting any political meeting in Dubai, in order to undemine the presidency of Muhammadu Buhari.

Atiku said he is  currently in Dubai to attend to his health needs and has never indeed conceived any negative political venture against Buhari,

The former vice president therefore advised  the political mischief makers who are peddling the rumours to allow him enjoy his peace.

He called on the political jobbers to desist from sinister propaganda designed to draw a wedge between him and President Muhammadu Buhari, in order to cause needless distrust and distractions in the President's government.

Some “political mischief makers and enemies of unity”had alleged that he has been hosting political meetings at Burj Al-Arab, Dubai.

According to Atiku, contrary to the rumours being bandied around by political opponents, he is currently in Dubai with his family for physiotherapy on his injured knee.

The former Vice President said he was  embarrassed by the deliberate falsehoods being spread against him by political opponents who are bent on causing distraction for President Buhari at a time all energies should be channelled into helping the President actualise his change agenda.

Atiku, who spoke through  press statement released by his media office in Abuja on Sunday, 27 December 2015 and signed by his Media Adviser, Mazi Paul Ibe,  described rumour mongers as “ill-motivated busybodies that don't wish the country wel.l”

He explained  that his medical treatment is his private affairs, which should not be politicised by anybody to achieve sinister objectives.

Atiku Abubakar said  he is entitled to enjoy his private life, including the right to attend to his health, without being harassed and lied against by political opponents.

Contrary to the insinuations by political opponents, the former Vice President said  the success of the Buhari administration has been his preoccupation, and that any true APC member should have the same zeal.

According to him, rumour mongers that seek to cause distrust and distraction in Buhari's government do not mean well for the APC administration.

The former Vice President said further that  with the challenges of providing good governance for the country and creating job opportunities for Nigerians, including reducing the impact of poverty, President Buhari needs all the goodwill and support in this endeavour.

According to the statement, “Whether at home or abroad, the Turaki is preoccupied with his unassailable support to President Buhari and his administration, especially in this critical time, as it works assiduously to turn the fortunes of our dear country around and make Nigeria work for the greater good of Nigerians”.

According to Atiku, rumour mongers and mischief makers are toxic to the progress of the APC and the country at large, adding that the campaigns are gone, and therefore, all energies should be constructively devoted to the success of the Buhari administration.

“This is yet another plot of the enemies of our country and democracy to divide, divert attention and distract the APC in its avowed commitment to secure the country, provide jobs for the mass of unemployed youths, build needed critical infrastructure, enthrone a regime of probity and accountability and pull the country out of the economic woods it has been consigned to by locust years of mismanagement.”