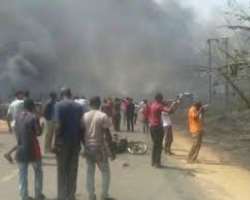 Family members and relations of victims of the gas explosion in Nnewi have started combing the bushes around the gas plant in search of corpses of their relations who are still missing, even as the Anambra Fire Service has eventually succeeded in putting out the fire.

Some of the relations told Vanguard that they decided to search the bushes because they got information that many people scampered into the bushes while attempting to escape from the scene of the incident.

A middle aged woman, Amaka said she is still in shock. According to her, 'I cannot just believe that my maid who was sent to refill gas at the factory is gone for ever.

'I am in deep trouble, what will I tell the family of the girl, I just brought her from the village last three months with the promise that I would help sponsor her education, I have gone to the Nnamdi Azikiwe University Teaching Hospital(NAUTH) Nnewi mortuary where the corpses are deposited but my maid is not there. Will I just go and tell the parents that their daughter is dead without the corpse,' she queried.

Other relations of the victims who were anxious of finding their loved ones refused to speak with Vanguard, they were seen searching the bush frantically.

A staff of Chikason Group who spoke on condition of anonymity said the workers recently concluded a two-week fasting and prayer after a prophet allegedly warned the Chairman of the group of the impending doom.

He however stated that the prophet did not specify which of the factories that would be affected, a situation he said made every worker in the group to participate actively in the prayer sessions.

'I don't know why all these bad things are happening. Our Chairman is a very good man who is so passionate about the welfare of the downtrodden even at great personal cost. Last time two of his fully-loaded trucks just disappeared on the face of the earth, those vehicles carried items running into millions of naira, that one is yet to be resolved and now this fire disaster,' he said

The Chikason  staff however, did not mention the name of the prophet but said that the man actually told them to pray against an impending danger

Meanwhile traditional ruler of Nnewi, Igwe Kenneth Orizu in company of his council of titled Chiefs has visited the scene of the fire incident, a spokesman for the royal father and former Chairman of Peoples Democratic Party PDP Anambra state, Chief Dan Ulasi told newsmen that Nnewi has never experienced such a level of devastation in its entire history.

He pointed out that the Igwe and his cabinet visited the victims who are recuperating in the hospitals in Nnewi while some other ones in critical conditions have been referred to Enugu.

The monarch expressed shock that an industrial town like Nnewi does not have a functional Fire Service Station inspite of the strategic importance of the the town to the state in particular and Nigeria in general, urging the government to address the anomaly.

A member of House of Representatives for Nnewi North, Nnewi South and Ekwusigo  Federal Constituency Hon Chris Azubogu who also visited the scene of the explosion noted that the accident has cast a big shadow on the bright light of Christmas for the people of the town.

Hon.Azubogu prayed for the repose of the souls of the victims of the inferno as well prayed for quick recovery of those that are still in the hospital.

The lawmaker said that the accident has made it incumbent on the government to enforce safety standards, stressing the need for regulatory bodies like Department of Petroleum Resources and similar agencies to ensure that environmental impact assessment are properly carried out before giving license to people to set up filling stations.

'That a bill is already on the floor of the House of Representatives which is aimed at empowering the fire stations at the federal and states so that they can carry out their duties as expected' he said. Vanguard