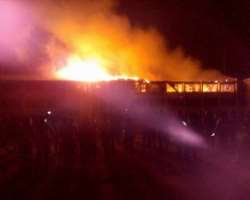 Fire has destroyed the Okeke Female Hostel at the University of Nigeria, UNN, Nsukka campus, the News Agency of Nigeria reports.

And eyewitness and a student, Joy Uwalaka, told the News Agency of Nigeria that the incident happened on Wednesday night.

According to the witnesses, the fire started around 7.30pm from the last floor of the two-storey building as soon as the Enugu Electricity Distribution Company restored power to the campus.

Uwalaka said: “It was when some of the students around the hostel started shouting fire! fire!! that I jumped out from my hostel, which was close to Okeke Hostel.

“There was a big smoke and fire burning on the last floor of Okeke Hostel.”

Speaking with NAN, Patrick Aro, the Chief Fire Officer in charge of Enugu North Senatorial District, said his men responded promptly to the distress call by some members of the public.

Aro, whose office was close to UNN first gate, however, said shortage of water to extinguish the raging fire made it to cause serious damage to the hostel.

He said: “My men tried their best as we rushed immediately we received calls that there was a fire outbreak in Okeke Hall.

“When we had exhausted our water, we were unable to get a refill from the two boreholes in UNN as they had no water inside them.

“Before we could get water in the boreholes in Nsukka town, the fire had razed the last floor.”

Aro said he was disappointed that the two boreholes on the campus had no water.

He said: “We saw gas cylinders and electric cookers in the course of trying to put out the fire.

“Though some students said the fire started as soon as the EEDC restored light, but those cooking gadgets gave a boost to fire.

“Had it been we were able to get water within the campus, the damage could have reduced.”

Prof. Peter Aka, the Dean of Students' Affairs in the university, said the fire incident at the hostel was an unfortunate one.

Aka promised that students in the affected hostel would be taken care of when they resume in January.

He said: “They have paid for accommodation fee and the school must provide alternative accommodations for them when they return.

“Though some students said the fire started when public light was restored, the university shall set up a committee to find out the real cause of the fire so as to avert future recurrence.

“The university will compensate all students that lost those belongings and valuable.

“My happiness is that no life was lost.”
Aka said the fire fighters exhausted their water on time because they came with a half-tank of water.

He said: “When the fire fighters had exhausted their water, attempt to refill from the campus boreholes failed because there were no water inside them.

“It is unfortunate that every item in the last floor of the hostel got burnt into ashes before the fire service could get water in the boreholes in Nsukka town.”

Also speaking, Ekene Orji, the President of the Students Union Government in UNN, said he was yet to recover from the shock caused by the incident.

Orji said the SUG would partner the university authorities to ensure that the affected students were provided with alternative accommodations when school resumed.

He said: “As students, this is a moment to show love to one another.

“SUG will do everything to reduce the suffering of the affected students as well as ensure that they receive compensation from university management.”

Chidimma Eze, one of the students in Okeke Hostel, said she lost many things to the inferno.

Eze said: “My happiness is that no life was lost.
“I know God will provide money for me to replace what I had lost to this fire disaster.”