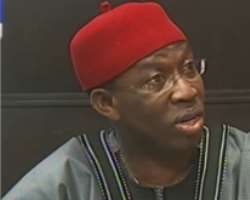 BEVERLY HILLS, December 24, (THEWILL) – Governor Ifeanyi Okowa of Delta on Thursday expressed gratitude to God for giving him victory at the Court of Appeal in Abuja.

The governor, who marked the victory at the Government House Chapel, Asaba, few hours after the court ruling, called on chief Great Ogboru and Chief Emerho O'tega, his opponents to sheath their swords and join his government.

Ugboru, the governorship candidate of the Labour Party and O'tega of the All Progressive Congress(APC), contested the April 11 elections with Okowa. Both petitioned against the governor's victory at the elections tribunal sitting in Asaba.

Dissatisfied with tribunal's affirmation of the victory, the candidates proceeded to the Court of Appeal which further affirmed the governor's victory on Thursday.

According to Okowa, the battle has been fierce in all angles and the rumours have been strong.

“But this is time for peace and not for war; the war is over and it is time for us to think about Delta and not about our self.

“And it s time for repentance and I call on Ugboru and O'tega to come back and embrace this government so that together we can work for the good of Deltans,” he said.