Npan Finally Opens Up On N120m Compensation For Newspapers 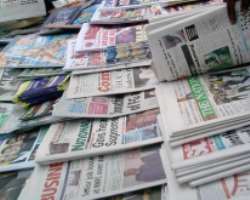 BEVERLY HILLS, December 24, (THEWILL) – It seems the last is yet to be heard on newspaper houses’ participation in the sharing of funds meant for arms procurement as the Newspaper Proprietors' Association of Nigeria, NPAN, finally opened up on the controversy surrounding the N120m compensation paid to print media houses.

The association explained that its action was widely misrepresented in the media over the payment of compensation to some media houses when their newspapers and circulation vans were impounded by security operatives between June 6 and 8, 2014.

In a statement issued and signed by the association's Deputy President, Mallam Kabiru Yusuf and General Secretary, Dame Comfort Obi, it explained that the money was to compensate for huge losses which the media houses suffered as a result of the seizure.

THEWILL had recently reported that the publishers of the PUNCH titles had suspended its membership of the association, over the alleged distribution of N120m from funds meant for arms procurement to some newspaper houses as compensation for the losses they incurred in June 2014 when armed soldiers seized newspapers and newspaper distribution vans.

“After a careful review of recent, and still unfolding, developments, Punch Nigeria Limited is suspending its membership of the Newspaper Proprietors' Association of Nigeria until further notice. This suspension takes effect immediately,” the media house stated.

More recently, The Sun Newspaper announced that it has returned the N9m compensation it received from the NPAN paid to them by Sambo Dasuki as compensation for newspaper houses whose offices were raided by the military last year.

In a statement signed by the Sun Managing Director/Editor-in- Chief, Mr. Eric Osagie, the paper said it took the decision to return the money following the controversy the episode generated:

“The Man­agement of The Sun Publishing Limited has considered the public outcry and diverse controversies generated among media hous­es, the Newspaper Proprietors Association of Nigeria (NPAN) and the public over the N120 million paid by the Goodluck Jonathan administration as compensation to newspaper companies for the unlawful seizure of their newspapers and stoppage of circulation by armed soldiers in several cities across the country in June 2014,” the medium noted.

But NPAN in a statement addressed to newspapers readers on Wednesday stated:

“The Newspaper Proprietors' Association of Nigeria (NPAN) at its expanded Executive Council meeting in Lagos on Thursday, December 17, 2015, examined the issue of compensation to its members whose newspapers were seized by security personnel in June last year.

“The association was concerned by the insinuations, posturing and uninformed commentary on the matter and wishes, out of respect to its readers and advertisers, to set the records straight.

“The facts are as follows:
Between Friday, June 6 and Sunday, June 8, 2014, some military and other security personnel impounded bundles of newspapers and circulation vans belonging to our members in Abuja, Oyo, Ondo, Edo, Ekiti, Delta, Niger, Kogi, Kano, Kaduna, Plateau, Benue, Imo, and Enugu states among others. In some of these locations, this illegal obstruction lasted five days.

“By this unlawful seizure of newspapers, our members suffered huge losses in sales and advertising revenue and in business goodwill.

“Many of our members affected by this reckless assault considered resorting to the courts to seek redress.

Even more alarming, the military authorities claimed that they had intelligence that newspaper vans were being used to ferry bomb making materials, an outrageous charge that seems to be a prelude to some sort of clampdown.

“Amidst this tension, and perhaps to stem the spate of multiple litigation against the security agencies and the Federal Government, the then President, Dr. Goodluck Jonathan, decided to hold a meeting with the executives of NPAN on June 12, 2014, at the State House, Marina, Lagos. At this meeting, the President apologised for the infraction of press freedom and the disruption of the business rhythm of our members.

“This was well received by our members. In recognition of the President's gesture, one of our executive officers, Lady Maiden Ibru, spoke in favour of the association dropping the demand for compensation. But because some members wanted to seek redress in court, it was decided to pursue a civil resolution of the matter.

“The Federal Government and the NPAN agreed to settle the matter out of court. In consequence of this, members were requested to submit a statement of their losses for consideration.

“All active member newspapers submitted their claims, with some as low as a few hundred thousand Naira and others running into hundreds of millions.

With no easy way to verify these widely divergent claims, the association leadership accepted the offer from the government, of a flat rate of N10 million to each of the 12 media houses affected. The total amount came to N120 million.

“Having suffered a lot of harassment during the military era, with some cases still winding their way through our courts, members agreed to a reasonable settlement over prolonged confrontation.

“Most of our members duly collected the compensation in good faith. The cheques for The Guardian, Tribune and Peoples Daily are still with our secretariat.

“Member newspapers that received money could not have any suspicion why it was paid from the office of the former National Security Adviser since the onslaught on newspapers was carried out by the security forces over which the office of the NSA, to some extent, superintended.

“It is unfortunate that some people not in possession of the full facts, are seeking to link the NPAN with the alleged misdeeds of those who may have received huge sums of money from the office of the NSA unlawfully. Nothing can be further from the truth.

“Our association assures the general public that the fierce independence, diversity and forthrightness that have characterised the Nigerian Press remain unshaken.