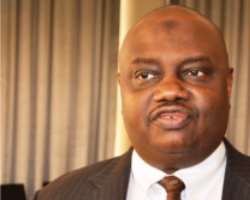 For the over five Years or so that he spent at the Economic and Financial Crimes Commission, Mr Lamorde courted controversy as a permanent pastime. His performance in office was lack lustre and far below average. If you describe his tenure as ineffective you are not too far from the fact because so much propaganda materials were published in the media by the public relations desk of the Ibrahim Lamorde- led EFCC but rational thinkers could see through his bag of tricks and his ‘the more you look the less you see’ practice direction. He was a master of intrigues whilst at the helm of affairs in EFCC. He spent EFCC fund to fight his perceived enemies using both online and traditional media outlets. He used premium times an online medium set up by a former staff of EFCC to wage war against critics who tried to express different opinion or who tried to criticise his failings and apparent inefficiency.

Ibrahim Lamorde courted the media infectiously but sadly it was the same Nigerian media that generously published series of reports of financial scandals that allegedly eclipsed his tenure which finally culminated in his disgraceful sack by his fellow Fulani born President Muhammadu Buhari. With his tail between his two legs Mr Lamorde said he was sick so he could stay away from the prying eyes of critics and other stakeholders who are waiting g in the wings to take him to task and demand accountability.

He has since disappeared into thin air in the name of foreign medical tourism exactly few hours after the National Assembly summoned him to appear to defend himself of allegations that he pilfered forfeited assets valued at multibillion dollars. But how can a policeman run into big money to finance an expensive medical tour?

After taking off to God knows where, he quietly sent his lawyer friend to appear before the Senate to oppose his invitation just as the same lawyer subsequently filed a suit to stop the National Assembly from the performance of its oversight function of investigating the allegations of fraudulent conversion of forfeited assets of economic crime suspects by Mr Lamorde.

Apart from allegations of fraud, Ibrahim Lamorde left a trail of atrocious acts that could be summed up as unmitigated impunity through his arbitrary sack of strong willed operatives from EFCC who were opposed to his less than professional style of management. Lamorde operated like an Emperor and a tiny dictator to his staff especially those with independent minds. But the Court of competent jurisdiction have started reversing some of his illegal behaviours and actions such as his Ethnic cleansing of officers from the South East region.

The Court also ordered her immediate reinstatement as Director of NFIU and all her entitlements paid, including 'ten percent' of judgement debt.

“That the procedure taken by EFCC in terminating Claimant/Juliet Ibekaku's appointment is defective and unknown to law and therefore illegal and oppressive.”

NFIU is an independent Unit under the EFCC and the coordinating entity for the receipt and analysis of financial disclosure of currency transaction reports and suspicious transaction reports in line with Nigeria's anti-money laundering and combating the financing of terrorism (AML/CFT) regime. It is also required to disseminate financial intelligence to law enforcement agencies and regulators.

Ibekaku's dismissal as NFIU Director is not unconnected with her insistence on operational autonomy for the NFIU for optimal performance, hence, her support to the bill for the establishment of Nigeria Financial Intelligence Center, NFIC, a move former EFCC Chairman Ibrahim Lamorde vehemently opposed. Available statistics suggest that the bulk of foreign donor support to the EFCC comes because of the NFIU.

Reacting to the judgement, a Civil Society Organisation, Media Initiative against Injustice, Violence and Corruption-MIIVOC hailed the ruling of the Court, describing it as 'justice at last'.

Executive Director of the group, Walter Duru argued that Ibekaku's reinstatement was long overdue, insisting that her victimization and eventual removal from office was a manifestation of the former EFCC leadership's disregard for the rule of law and due process.

According to Duru, “Ibekaku's ordeal was a clear case of abuse of office, arbitrariness and criminal intimidation by a supposed anti-graft agency under the leadership of Ibrahim Lamorde. Lamorde's regime in EFCC remains the worst in the history of the Agency. There is need for a total probe of his administration. Corruption and impunity flourished in the Commission under Lamorde's watch. The Federal government must seek his repatriation to Nigeria to face prosecution for his atrocities in office.”