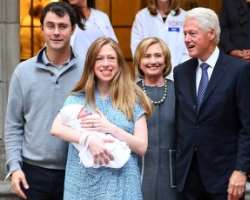 SAN FRANCISCO, December 24, (THEWILL) – Bill and Hillary Clinton are going to be grandparents again. Their daughter, Chelsea announced on Twitter yesterday that she is expecting her second child with husband, Marc Mezvinsky.

She posted a picture of her first daughter Charlotte who she said is going to be a big sister come next summer. See that below. Grandparents, Bill and Hillary couldn't hold back their excitement at the news. See their tweets below!