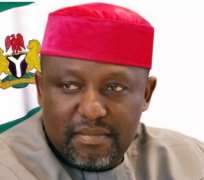 An Owerri based legal practitioner Barr. Emperor Iwuala has described the recent attack on the person of the Chairman of the Nigeria Bar Association (NBA) Owerri Branch Barr. Stanley Imo by Governor Rochas Okorocha during the recent event marking the beginning of the year 2015/2016 Legal Year held at the High Court Owerri as petty and unbecoming of a governor.

The former media aide to the Imo State Deputy Governor made this remark recently while briefing journalists in Owerri.

Barr Iwuala said that the NBA Chairman did not speak for himself but spoke the mind of all the lawyers in the state. He also said that all the issues raise in the NBA chairman’s speech were true and very important for the sustenance of justice administration in the state but was disappointed that the governor allegedly went petty.

While calling on the governor to stop abusing the country’s constitution as it relates to the independence of the judiciary, the Mbaise-born activist urged the governor to render an unreserved apology immediately to lawyers and the NBA chairman over the alleged insult on the bar chairman or should get ready for more knocks from members of the legal profession in default of the apology.

It could be recalled that during the recent Special High Court Session marking the beginning of the 2015/2016 Legal Year held at P.C. Onumajuru Square High Court Owerri, Imo State, the Nigeria Bar Association (NBA) said that Governor Rochas Okorocha’s alleged continued control of funds belonging to the Imo State Judiciary was unconstitutional and a gross misconduct that is enough to impeach the governor.

This was contained in an address presented by the Chairman of the NBA Owerri Branch Barr. Imo at the event. Barrister Imo also used the occasion to berate members of the Imo State legislature for allegedly abdicating their legislative functions to work as task force members and road contractors; duties he said were meant for the executive arm of the Imo State Government.

He also condemned the recent acts whereby salaries of magistrates and law officers in the state were allegedly cut down by more than 60% and the recent suspension of directors in the state ministry of justice which he said was done without due process. However, the legal luminary called on the state government to fully implement the provisions of the country’s constitution as it relates to judicial autonomy as the only way to have an independent and virile judiciary.

In his reaction also at the event, Governor Okorocha said that the bar chairman was a card –carrying member of the PDP and a lair.