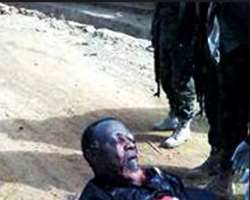 Muhammad Ibraheem Zakzaky, the only surviving son of the the leader of the Islamic Movement in Nigeria, Sheikh Ibraheem Zakzaky has said that the army killed three of his siblings during last week’s onslaught at their residence in Zaria. Ibraheem said that his three brothers namely, Hammad, 17, Ali 15 and Humaid, 13- were all shot dead in front of their father during the raid by the military last week Sunday.

His revelation came as the Islamic Movement in Nigeria yesterday said that it’s members would continue with its peaceful protests over the killing of its members by soldiers during a recent carnage in Zaria, Kaduna State.

In a statement made available to journalists last night, Ibraheem recalled that earlier in June 2014, the military abducted and killed his three brothers after a peaceful pro-Palestinian procession. Those killed at that time were Ahmad, 22, a final year student of Chemical Engineering in Shenyang University, China; Hameed, 20, who was studying Aeronautical Engineering in Xian University, China and Mahmud, 18, who was a student of Al-Mustapha University, Beirut, Lebanon.

He said that of his eight siblings, only two –Nusaiba and Suhaila, are alive today, while the remaining six were slain by the army. According to him, Suhaila survived with wounds in her face. The statement read in part : “Thank God, I have been able to finally speak to my sister (Suhaila) after seven days of terror, compliments of the Nigerian army.

“They have been released from the ordeal of being with an army that is supposed to protect them. But I call to all those who care that, we must continue with our peaceful protests, however and whenever we can. Just as we have been doing for over the last 30 years, and as long as we breathe, I hope that we will continue to do so.”

The cleric’s only surviving son said that “we will continue to protest in order to demand our right to bury our dead properly, to tend to our wounded and to see to the health of our leader, my father.”

“Then comes our property which has either been destroyed or fenced by looters under the watch of the Nigerian army. He said: “I will continue to demand unbiased, impartial justice, for my six brothers, for as long as I breathe.” Zakzaky’s elder sister, Hajiya Fatima Yaqoub, was among those killed in the cleric’s residence.