Dasuki, Bafarawa, Yuguda, others get bail with stiff conditions 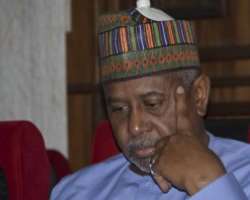 An Abuja High Court at Maitama has remanded the ‎former Minister of Finance, Bashir Yuguda, former governor of Sokoto State, Attahiru Dalhatu Bafarawa and his son, Sagir Attahiru in prison custody, pending the perfection of their bail conditions.

They were  granted bail on Monday by another Federal Capital Territory High Court in the sum of N250 million each and two sureties in like sum.

Ruling on the bail application on Monday Justice Peter Affem, ordered that ‎the sureties must be a retired or serving civil servant in a government parastatal.

One of the sureties must be resident of the Federal Capital Territory, Abuja, who must also own landed property worth 250 million Naira.

Dasuki and the five accused are facing a 22-count criminal charge bordering on allegations of diversion, misappropriation and breach of trust in respect of N19.4 billion, brought against them by the Federal Government..

Justice Affen, in his ruling, mirrored that of the Justice Hussein Baba-Yusuf, which last week had granted Dasuki and four others bail on the 19-count money laundering charges to the tune of N13 billion.

The judge also used the same conditions for bail given by the higher court, directing that the six accused are to produce sureties, one of who must be a serving or retired Director in the Federal Civil Service Commission.

He said,  “The sureties must provide property worth N250 million within Abuja, and an evidence of means.

“The defendants are also expected to deposit their travel passports and their counsels must notify the court of any intention by the defendants to travel out of Abuja. And until they perfect their bail conditions, the accused person will remain remanded in the custody of the EFCC.”

Justice Affen adjourned the matter till February 2 and 3, 2016 for definite hearing.

Dasuki and five other accused persons, comprising of Yuguda, Salisu, Bafarawa, his son Saggir Bafarawa, and his company Dalhatu Investment, are facing trial on the 22-count charge.