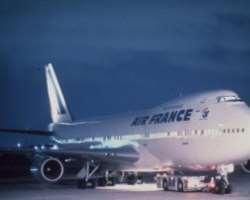 A suspicious device found on an Air France flight from Mauritius to Paris that prompted an emergency landing was harmless and caused a “false alarm”, the airline admitted.

Air France staff decided to land the Boeing 777 at the nearest airport – in the Kenyan port city of Mombasa – after a passenger found the object in the toilets and alerted crew, CEO Frederic Gagey said.

The suspicious object was made out of cardboard and paper and contained a timer, Mr Gagey said, adding that it must have been planted during the flight.

“All the information available to us at the moment indicates that the object was not capable of creating an explosion or damaging a plane,” Mr Gagey said in Paris.

“It was a false alarm.”
Air France said it planned to take legal action over the incident, without giving further details.

The 459 passengers and 14 crew on board flight AF463 were evacuated using the emergency slides after the plane landed at 21.36 GMT.

The device was retrieved from the aircraft by explosives experts from the Navy and DCI (Directorate of Criminal Investigations), Police Inspector General Joseph Boinnet said earlier on his Twitter account.

Kenyan Interior Minister Joseph Nkaissery said at Moi International Airport that an undisclosed number of passengers were being questioned about the suspect device, but did not say if they were under arrest: “We’re in touch with Mauritius to know how security screening of passengers was done. A few passengers are being interrogated,” he said.

Air France said in a statement that it had “immediately decided to reinforce the security measures in Mauritius” after the incident, which follows three bomb alerts in the US in the last few weeks.

Airports of Mauritius, the operator of the airport in the Mauritian village of Plaine Magnien, said that the Deputy Prime Minister Xavier-Luc Duval would hold a meeting today with government agencies involved in security in order to discuss measures taken following the incident.

“As precautionary measures, Mauritian authorities have tightened security procedures at the airport,” Airports of Mauritius added.

Kenya’s Civil Aviation Authority said on its Twitter account that flights from Mombasa airport had been disrupted because of the emergency landing.

Mr Gagey said arrangements were being made to fly the passengers and crew back to Paris, adding they would return early today.