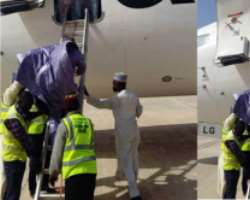 SAN FRANCISCO, December 20, (THEWILL) – Scandalised by the use of a ladder to disembark passengers from an Aero Contractor's flight at Bauchi at the weekend, Mr. Hadi Sirika, Minister of State for Aviation, has directed an immediate investigation into the use of the unauthorised equipment by the airline.

A statement signed by James Odaudu, deputy director, press and public affairs, for Sirika, noted that the minister received several reports indicating that the airline used a ladder to disembark passengers from a Boeing 737 aircraft at the Bauchi Airport on Saturday, December 19, 2015.

According to the minister, the act is inconsistent with Nigeria Civil Aviation Regulations (NCARs) and International Civil Aviation Organisation (ICAO) Standards and Recommended Practices (SARPS).

He said the investigation would determine the immediate and remote causes of the incident with a view to developing and implementing measures that would prevent a reoccurrence of the unsafe and unacceptable procedure that exposed passengers to risk of serious injury.

He reiterated that if the airline was found culpable, the full weight of sanctions within extant laws and regulations would be applied on it, and assured the travelling public that the Ministry of Transportation in collaboration with Nigerian Civil Aviation Authority (NCAA) would ensure strict adherence to the NCARs as well as ICAO Standards and Recommended Practices by all operators.

Sirika further stated that the ministry would not shriek its responsibility to ensure a safe and secure air transport services, which he viewed as sacrosanct.

Meanwhile, Aero in a statement late on Saturday, said, “a special charter flight operated by Aero to Bauchi had problems with unserviceable equipment by the airport management in disembarking about 34 passengers from Abuja.

Consequently, against the airline's wish and operation safety guideline, the passengers used a ladder to disembark.

“However, at the time of boarding the air stairs became functional and the passengers boarded successfully.

“Aero wishes to state that it took adequate and safety measures for this operation, including the airport's ground staff crew to handle the air stairs equipment in Bauchi, unfortunately it became unserviceable at the point of disembarkation. Although the airline crew tried to calm down the passengers to wait while the equipment was being fixed, the passengers insisted on their own volition to disembark against all safety protocol of the airline.”

The carrier disclosed that it was reviewing its safety measures with all charter operations to all airports to prevent such reoccurrence.

In a related development, the Nigerian Aviation Handling Company plc. (NAHCO) had distanced itself from providing ground handling services to airlines in Bauchi, saying, “NAHCO does not have operations in Bauchi.”

Tayo Ajakaye, spokesman for the firm, in a statement, said for the airline to embark on that chartered flight to Bauchi, it definitely would have made its own private arrangements.

Ajakaiye said: “The attention of the NAHCO has been drawn to reports making rounds on the social media to the effect that it was its failure to provide handling service to one of its esteemed clients, Aero Contractors, that caused passengers of the airline to disembark with ladder at the Bauchi Airport.

“Nothing can be further from the truth. NAHCO does not have operations in Bauchi. This fact is well known to Aero and all our client airlines. So, for Aero, Aero's statement in this regard is particularly clear. It never mentioned NAHCO, nor for that matter, any ground handler as the reason it had to innovate.”